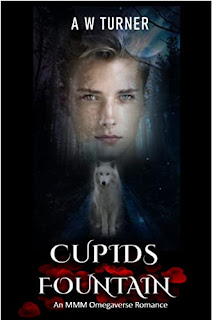 A desperate Omega will do desperate things – even kidnap a Prince.

My twenty first birthday was around the corner and I still haven’t found my Alpha mate. It’s not like I haven’t tried to find him. I have. I’ve tried everything I can think of – from speed dating to Apps and everything else in between, only none of the guys I met made my mate mark tingle. There’s only one option left, and that’s an old wives tale about Cupid’s Fountain. But I’m getting desperate, if I can’t find him in time I’ll be packed off to the commune for un-wed omegas, a fate almost worse than death.

When I was twelve my mate mark appeared – it was fates way of telling me my Omega was now out there for me to find. But a mate mark means nothing to me, like it meant nothing to my omega father who left me behind with a monster. I neither want nor have time for a mate. Who will only get in the way of me performing my duty, a duty I have sworn to uphold till death. I’m the bodyguard to the 2nd Prince of Eminiar. If he hasn’t got a mate mark, then I don’t need one either.

All I’ve ever wanted was someone to love and adore, only fate hasn’t blessed me with the mark. My best friend and body guard Alexi has one that he doesn’t want. If only he’d realise what true happiness awaited him he’d have second thoughts. If I can’t have my happy ever after, then I’ll use every power I have to make sure he has his – whether he wants it or not.
With Quinn and Sebastian working together, Alexi doesn’t stand a chance.

Next Up is Naomi Aoki