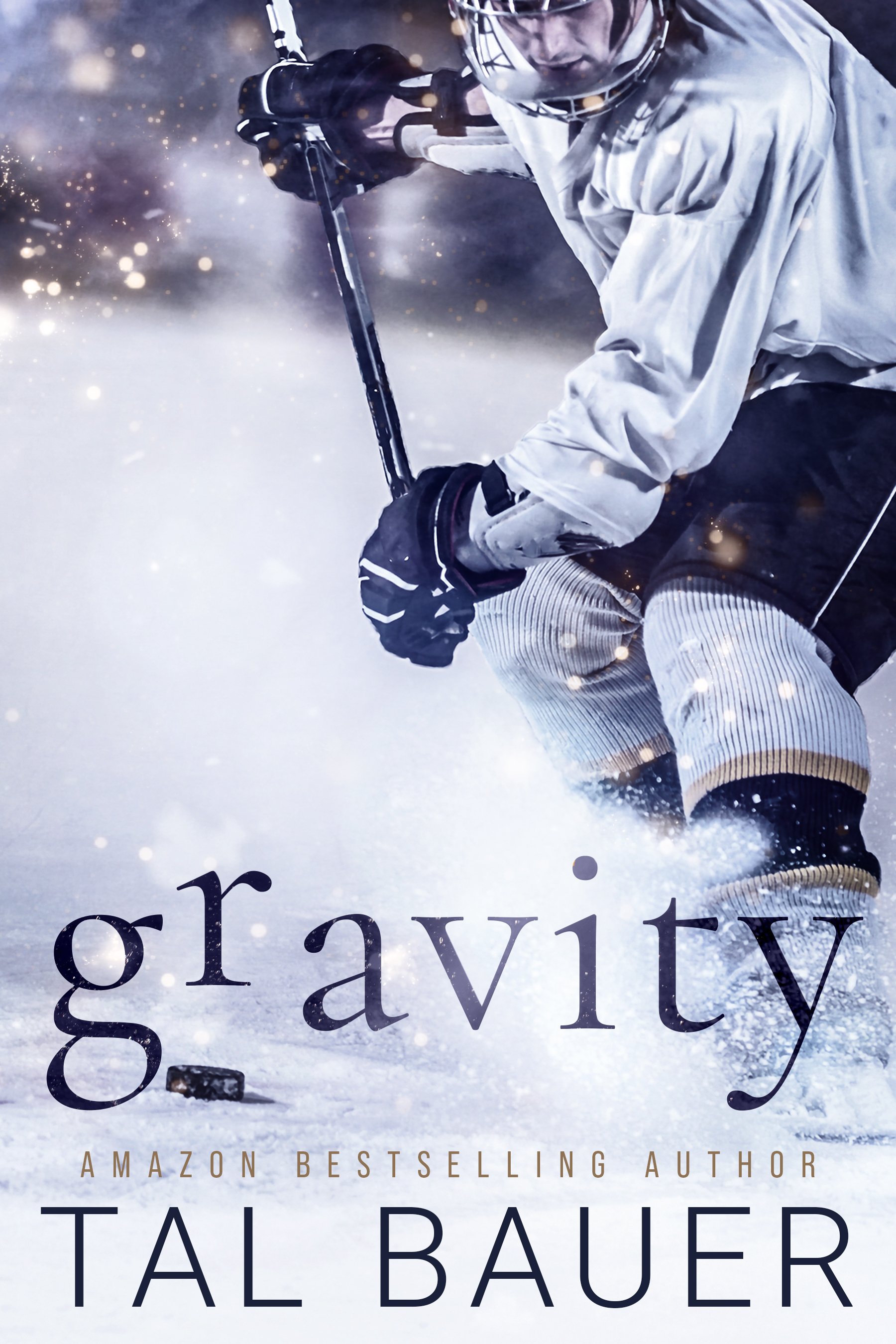 Hockey is my life. This game pulled me from my tiny Quebec hometown all the way to the NHL, and now? I’m the number one player in the league. Team capitaine for the Montréal Étoiles. I’m shattering records and packing arenas every night, and I’ve promised my team: we’re going to win the Stanley Cup this year.

But I’m keeping big secrets. I’m thinking dangerous thoughts, and dreaming about impossible things. Like how a man’s lips might taste, or how his body might feel in my arms.

I can’t go there. I’ve got to focus. Team. Hockey. Cup. What my heart wants doesn’t matter.

So why am I falling head over heels at the NHL’s All-Star Weekend?

I can’t do this. I can’t fall for Hunter Lacey. He’s a hockey player. We’re both in the NHL. He’s on a different team. And, oh yeah, he’s straight.

I’m a middle-of-the-road, nothing-special hockey player. Good enough to be drafted into the NHL, and I’ve been on the roster for the past two years, but I’ll never make the Hall of Fame. I’m just trying to keep my head up and get through each day, until this wild ride comes to an end.

Deep thinking isn’t really my thing. Look inside myself? Lotta beer and burgers there.

I never thought I’d be invited to the All-Star Weekend, but here I am. And there’s my hero: Bryce Michel, league superstar.

Saying hello to Bryce turns into hours spent together on the ice, and then an invite to dinner, and then days at each other’s side. I’m in heaven. He’s my hero, and this is the coolest—

Then Bryce’s lips land on mine, and the world turns upside down. 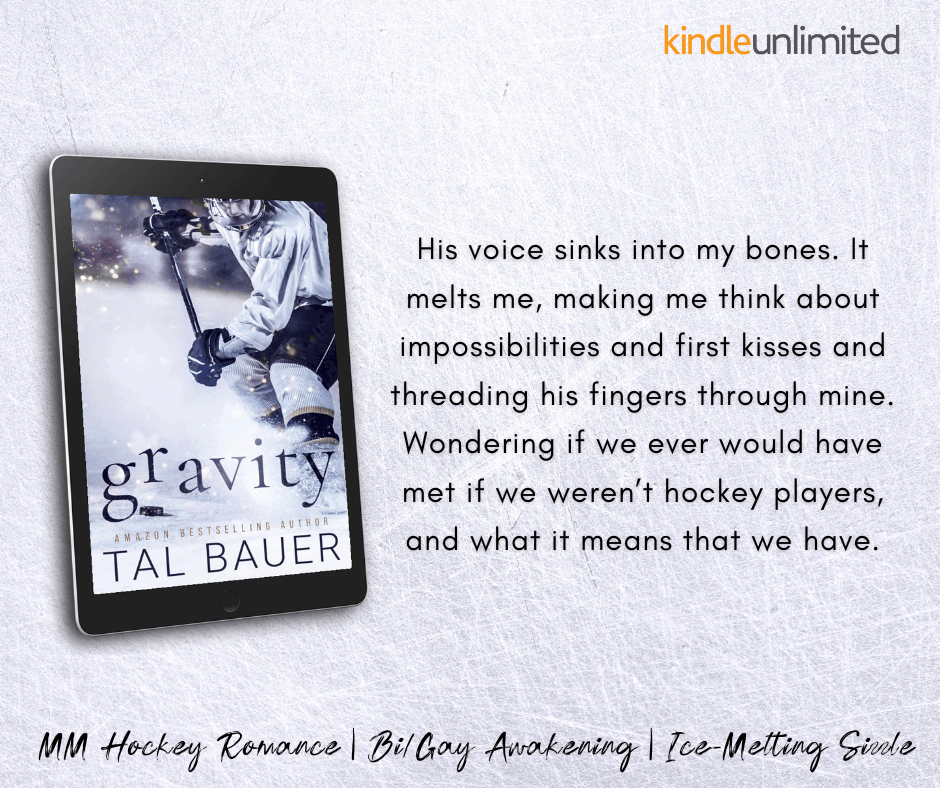 There he is, Bryce Michel. Hockey superstar. The only player to knock on the door of the Great One’s records. Fresh from his most recent victory when he led his team in obliterating the Detroit Roughriders. Those stats he put up in the game…

He looks like a god, too. He’s all muscle, everywhere. I carry extra heft to absorb the punishment, and my strength is concealed by my small protective layer of puck-catching fluff. Not Bryce. He’s slender and lithe, with an angular, chiseled body and long, fine-drawn features. His dark hair is short, and he doesn’t have any bruises or gashes on his nose or his cheeks from high sticks or elbows. His wide eyes are sparkling. They’re royal blue, perfectly matching his Étoiles team sweater.

He raises his stick over his head in a salute to the crowd, and the noise, somehow, grows.

That glide, his smile, the effortlessness. Fuck, he is a hockey god.

Cheers race around the bowl like someone’s lit a fuse. Even the rest of the players—a testosterone-pumped, who’s-who mix of the biggest names in the league—stop and slap their sticks on the ice.

I’m too frozen to move. To slap my stick. To cheer. The Montréal Étoiles and the Carolina Kitty Hawks have played against each other six times in the past two years, but Bryce was rested after injury during four of those games. Carolina was absolutely not a threat to the Étoiles, and they didn’t need to send the best player in the league out against us. Both of the other times our teams met, I rode the bench while he played. We’ve never shared the ice.

Bryce takes two circuits around the rink. Hockey players and cameramen cluster around him, and he high-fives or fist bumps everyone who says hello.

He’s twenty-six, four years older than me, at the age when players start getting looked at twice if they’re slow on the push-off or coming over the boards, but he’s limber and loose like it’s the end of summer and the start of the season, not like we’re halfway through what feels like a never-ending car crash. Most mornings, I feel like I’ve dived off the top of a three-story building. Twenty-two is too young to be chewing Tylenol all day, but show me an NHL player who doesn’t pop painkillers like candy.

His blue eyes flare when they meet mine. A moment later, Bryce beams, and the full force of his smile—the same one I’ve seen on ESPN, Sports Illustrated, and Men’s Health—hits me like a slap shot in the center of my numbers.

He cuts through the small crowd surrounding him and heads right for me, his hand outstretched like he’s saying hello, like he wants to introduce himself. To whom? I look over my shoulder, trying to spot the bigger, better player shadowing me.

Bryce slides to a stop, snowing my skates.

“Hunter Lacey.” His smile widens. He has a sharp Quebecois accent, and the upriver French cuts through his spoken English like a melody. “Bonjour.”

Holy shit, he knows my name.

My heart takes off. It has never beat this fast, not from going over the boards in my first game or from throwing myself in front of a slap shot. I can’t breathe because this, suddenly, is rarified air. Bryce moves in a world beyond mine, at the peak of perfection. He’s too high.

Jesus, he watched me play and he’s smiling at me? Not laughing at me, not telling me to give up the sport, quit the league, go wash cars for a living, or feed penguins at the zoo, or do anything other than pretend to be worthy of wearing his jersey number. He’s smiling like I actually have a right to stand on this ice with this man and shake his hand.

The player from Buffalo I was warming up with hollers my name a half-second before he slaps the puck at my face. I see it coming, but I am powerless to stop it. Too much adrenaline, too much raw shock. Too much Bryce Michel less than a foot away from me. I am about to get a puck to my face, a mistake I haven’t made since high school—

He pulls the puck to the ice with a smack, dances it back and forth around his stick, and then, like a soccer player, figure-eights it between his skates before bouncing it up onto his blade. He’s still wearing that lopsided little smile, with his head tilted down, his eyes cast up, like he’s bashful about his skills.

I could faint. I could also puke, right onto the ice, right between his skates. “Hi,” I squeak. “I wear your number.”

“Enchanté.” Bryce’s grin grows. “I wear your number, too.” 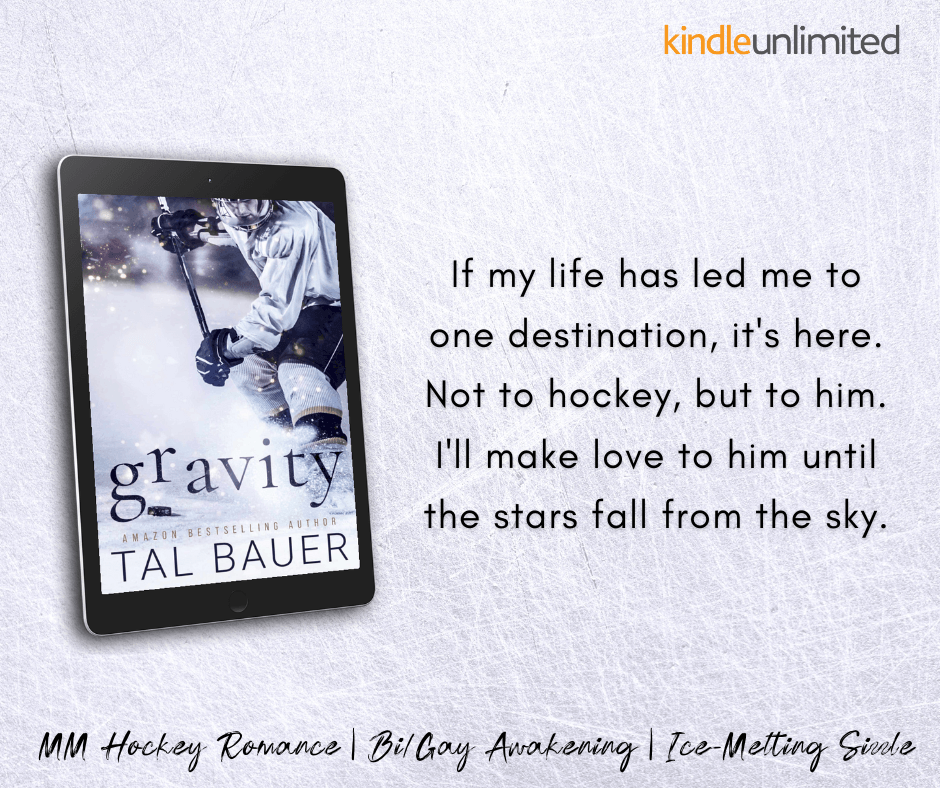 Tal Bauer writes breathtaking, heartfelt, and often action-packed gay romance novels. His characters are head over heels for each other, and fight against all odds for their happy ending.Nothing stands in the way of love.

Tal is best known for his romantic suspense novels, including The Murder Between Us and The Grave Between Us. He has also written You & Me, The Jock and The Quarterback, along with the Big Bend Texas Rangers series.