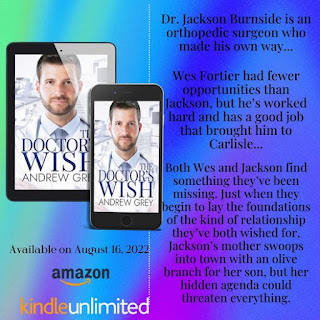 Dr. Jackson Burnside is an orthopedic surgeon who made his own way. Always different, he got out of Natchez before his family could throw him out, but still wishes things could be reconciled. He’s built a successful practice and a sound reputation in Carlisle. When he’s called to the hospital for a consultation, the last person he expects to meet is Wes.

Wes Fortier had fewer opportunities than Jackson, but he’s worked hard and has a good job that brought him to Carlisle. A work injury lands him in the ER, where he crosses paths again with Jackson, who may be the silver lining he has been praying for in a life filled with gray.

Jackson’s and Wes’s renewed friendship deepens to attraction and possibly unspoken love. Both Wes and Jackson find something they’ve been missing. Just when they begin to lay the foundations of the kind of relationship they’ve both wished for, Jackson’s mother swoops into town with an olive branch for her son, but her hidden agenda could threaten everything.

“You had a consultation for me?” Jackson asked.

“Good to see you, and thanks for coming down. Yeah, he’s pretty banged up. I’d like to

admit him, but I can’t until I know more.” He rolled his eyes in a silent protest of hospital

bureaucracy. “I really wanted your opinion on his leg. The arm we were able to set cleanly, but

his fibula is in bad shape. I’ve got at least four pieces, and while three are in the right

position….” He showed Jackson the images. “What do you think?”

Jackson had seen worse. “The break is in a bad spot, and trying to correct the issue is going

to affect the other pieces. Basically we’re going to need to pin each of the bone fragments in

place so they heal correctly.” This was something he had done before. “There’s going to be a

long healing time, and I hate to say it, but this needs to be done soon. The longer these pieces

are floating around, the more damage they’ll do to the rest of the leg.” He checked the images

“Then what do you suggest?” Rosco asked.

“Let’s talk to the patient. I’d like to have him prepped for surgery if there’s a room and a

team available. We should meet with the patient and explain what we want to do.”

Rosco continually made notes in the chart. “Let’s see what he says and get permission.

Then I’ll get the ball rolling.” He went back to work, and once Rosco was ready, they headed

down the hall to one of the rooms.

“Jackson?” The deep southern drawl wrapped around him like a warm, familiar blanket.

“It is you.” Wes Fortier smiled and lay back on the bed. “What are you doing here?”

Jackson stepped into the room. “I was going to ask the same thing of you.” They were both

a long way from Natchez. He had left the town he’d grown up in to go to college and hadn’t

been back there since. Wes had grown up in the house next to his, and they had been best

“I’m working out at Jordan REL Logistics. I got a job with them back home, and they

transferred me here four months ago. I’m the assistant facility manager, and I really need to get

back to work.” He tried to sit up, but hissed.

“Just relax. I’m the orthopedic surgeon who’s going to put your leg back into one piece.” It

was good to see his old friend, but he wished it was under better circumstances. “I want to get

you prepped for surgery so we can repair your leg.”

another of them pain pills.” He closed his eyes and stilled, the pain easing away judging by the

relaxing tension in his face. “You always said you were going to be a doctor, even when your

daddy yelled at you that you were never going to amount to a hill of shit.” The fight he’d had

Next Up is Jacey Davis

Andrew’s hobbies include collecting antiques, gardening, and leaving his dirty dishes anywhere but in the sink (particularly when writing) He considers himself blessed with an accepting family, fantastic friends, and the world’s most supportive and loving partner. Andrew currently lives in beautiful, historic Carlisle, Pennsylvania.