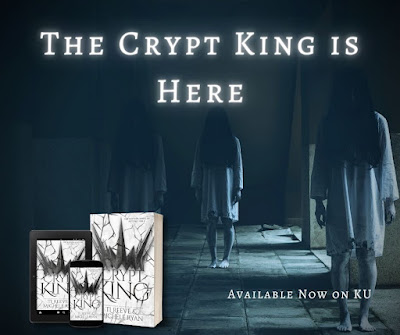 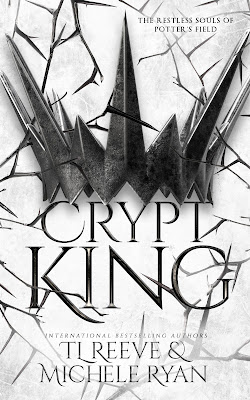 There’s a lore about a Crypt King who rules over the forbidden cemetery and collect all the lingering souls. His three companions a step behind…
Isa DeCuir has been marked…
From the moment she was born, Isa has had a target on her back. After a horrible accident claimed the lives of her parents along with her best friend, Keres’, father, strange things began to happen—including her inability to control her spellcasting.
Mads Billiot has been waiting for this moment all his life…
He has honed his skills, chosen his partners wisely, and put into motion certain schemes to not only protect his future bride, but to also break the network of witches within the Grand Du Parish. However, there is a nasty secret buried with the dead that threatens everything he’s accomplished along with his future bride.
Ethan Guidry has walked the earth for over a millennium…
As a Grim, he has seen what can happen to lost souls or those who feed themselves to the Crypt King. There’s no way Ethan would allow Isa to become another of the King’s hapless victim. He’d do anything for the Witchling including becoming her familiar and sharing his life with her. However, there are strange happenings afoot, and his wishes might truly be nightmares.
All Hallows Eve approaches…
As the veil between the living and the dead thins, can Mads and Ethan protect Isa from the truth? Or will Isa become the next victim of the Crypt King?

His foot falls were silent, determined not to disturb the grieving girl as he drew near. This beautifully damnable woman who’d haunted his dreams for more years than he recklessly should’ve allowed. She consumed him. Enthralled him. It was as if she drew what was left of his brittle soul from his worthless body, and he willingly gave over to her. With her alabaster skin and long, dark-hickory hair, falling in loose waves around her full, pouting features. Or her entrancing amber eyes that ensnared his attention. He didn’t know if he should devour her or fuck her. Neither were mutually exclusive. Both would be fun.

She could destroy the worst parts of him. He’d willingly lay himself bare and allow her to pick over his useless bones as carrion would a desolate carcass, left to decompose and become fetid in the humid heat of a Louisiana Summer day.

Mads stood there, at the top of the knoll, cast in long looming shadows from the setting sun and obelisks built in tribute to the dead, watching as Isa knelt in front of her parents’ vault to place white lilies on their side-by-side graves. He couldn’t help but sneer. Neither of her parents was perfect. Both had secrets, and their secrets were why Isa and her brother Ronan were kept isolated from the rest of the community. Yes, some—the ass kissers as he liked to call them—would say it was because of her being Keres’ protector, but Mads knew the real reason.

What he didn’t know was how much of the truth about that fateful night had made its way back to the daughter of Meredith and Henry DeCuir. Mads had been privy to all of it. From the lies to the scandal to the reason Lydia called Henry to her house. He even knew how the car went off the road and Lydia survived. He wondered absently, as he observed his prey, what Isa’s reaction would be to the news? There’d been no doubt in his mind, she had all the pieces of the grand puzzle hidden in the official documents and investigation of the tragic accident—murder—the only thing he couldn’t fathom was why she never dug into the case.

A part of him was giddy at the idea of her diving into the meat of her parents’ relationship with the Belfleurs. To watch her sully her innocence with their salacious scenes and the hedonistic tendencies, her parents had partaken of. The group orgies with the coven they’d called family—until they weren’t. The nights he’d spied them—the Belfleurs and the DeCuirs—in that very cemetery where she sat, communing with the moon goddess. He licked his lips. Those nights were fun. Would it disgust her to know he’d jerked off while watching them, climaxing hard as the magic sang through the tall, weed strewn grass and church rubble? Would it excite her? Just the memory of such naughty, debauched things made his cock twitch in remembrance of those nights long ago.

The scent of brimstone and sulfur broke the trance Mads had been held within, and his gaze sharpened. There was that mangy mutt, again. Pinpricks of rage spread across Mads’ body, and his hands curled into fists. He’d been nice to Ethan. Gave him a small desolate spot among the headstones and megalithic monuments to call home, yet the bastard couldn’t stay away from what—who—belonged to Mads. He swore he’d make the rabid Church Grim pay for his transgressions, uncaring of how it would appear to his bride-to-be.

Rabid dogs needed to learn to heel. Ethan was no exception to the rule.

“Should we deal with him?” As if sensing the sour turn of Mads emotions, Rafe apparated beside him, rubbing his hands together while licking his lips.

Rafe, Brody, and Jude were three of the best minions who’d ever had the pleasure of joining him. When he’d been anointed with his particular abilities, he’d claimed three souls and breathed life back into their worthless bodies. Their contracts were indefinite. Their loyalty bought and paid for. Yet, in all the years they’d been together, a true, unbreakable friendship had solidified between them. Something he never thought possible.

Mads turned to his best friend and shook his head. “Isa’s remembering her parents today. Give them space.”

Rafe cocked a pierced brow. His ashen-colored eyes swirled with disappointment. “He’s too close to her. I don’t understand why you haven’t castrated him yet.” The snarled gnash of his words matched the jealousy slithering through Mads’ veins. Truth was, he’d probably asked himself that question a million times, yet he didn’t have the answer either.

“We have all the time in the world,” Mads muttered. “Perhaps I’d like to play with my food before I gorge myself.”

TL Reeve, a bestselling, multi-published author was born out of a love of family and a bond that became unbreakable. Living in Alabama, TL misses Los Angeles, and will one day return to the beaches of Southern California. When not writing something hot and sexy, TL can be found curled up with a good book or working on homework with a cute little pixie.

Michele Ryan is a multi-published author who embraced her creative passion and co-authored several books with fellow author TL Reeve. Michele has also published two solo novellas. Michele is a lifelong resident of the state of New Jersey, along with her husband and three children, whom she refers to as her hobbits. When Michele is not plotting or writing, she can be found either volunteering at her children’s school or reading.