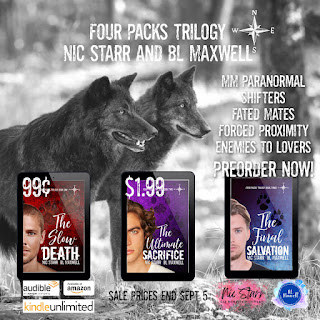 Luca Bassani enjoyed a quiet, ordinary life. As an IT guru, most of his time was spent engrossed in technology and away from people. Now all that’s changed. As the one man who is a compatible donor, he’s suddenly essential to keeping his alpha healthy and preventing him from succumbing to The Slow Death. But serving his alpha, Zander Kingston, is something Luca is proud to do.
Diesel Jones is an enforcer. Following in his father’s footsteps, he has big boots to fill. But he’s focused and dedicated to the East Territory pack and avoids anything that distracts him from his duty. His dedication, together with his brawn and brains, ensure his reputation as being the best at his job.
When a possible threat on Alpha Zander Kingston’s life is uncovered, tensions rise within the pack. Security is increased and Diesel is assigned as the personal bodyguard for Luca. They find themselves paired against the enemy while battling their growing attraction.
Diesel must keep Luca safe and ensure his alpha’s life by doing so. But pack rivalry is strong and when threats become actions, suddenly Diesel is in the race of his life to ensure the future of the pack and to save the person who has come to mean everything to him.
The Final Salvation is part of the Four Packs Trilogy. While it can be read as a standalone, to ensure maximum enjoyment, it is best read in series order.
#forcedpromity #oppositesattract #fatedmates #hurtcomfort #mmparanormal #shifters #fatedmates

Next Up is Gigi Rivers