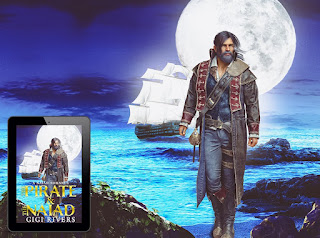 The Pirate and the Naiad

A pirate captain. A naiad who despises him. An MM fantasy romance with an HEA.

Raiya despises humans. They abducted him from his home, kept him in captivity, and forced him to fight other nymphs. But when a pirate ship crewed by both naiads and humans rescues him, he is confused at seeing them working and living together. What’s more baffling is his attraction to the ship’s captain, with his calm confidence, broad shoulders, and steely grey eyes. Even so, Raiya will never give in to his desire for a human.

Silas is the pirate captain of the Naiad’s Revenge. His mission is to lead the crew in their fight against the Order. But when Raiya comes aboard, Silas can’t deny his attraction to the scowling naiad stalking around his ship. However, Raiya clearly loathes Silas, so there is no point wishing for something more.

As they fight alongside each other, Raiya realises that Silas is different from the humans he’s dealt with before. Still, after everything humans have done to Raiya, could he ever love one?

The Pirate and the Naiad is the third novel of the A Naiad Romance series. Each book contains a HEA with no cliffhangers and can be read as a stand alone.

Next Up is Jaiyde Thomas