From Bad to Worse by Gin Vane

Book 1 in the Southern Awakenings series 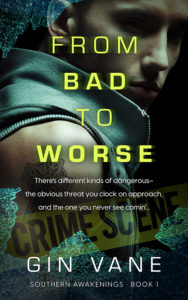 Both detectives know that there’s different kinds of dangerous—the obvious threat you clock on approach, and the one you never see comin’… Colt Harkan’s not much of a laughing man, or he might better appreciate the biggest joke of his life. Fresh from his time undercover, his first day at Mason PD finds him partnered with Everett Kane—a man determined to stumble through life and still come up the golden boy. Makes it all look so easy, talking to people with his sun-bright smile. Everett just…cares. It’s like the man can’t help it. But even in Mason, Colt sees darkness at the fringes, and catching that State Rodeo case starts two unexpected obsessions—proving Patrick Combs’ death was a murder, and screwing around with Ev in the backseat of their car. Seems to work out fine for them both, when Ev isn’t busy with his women or his wife. One of these days, Everett’s going to find the rock bottom he’s digging for, and Colt can’t help but push him along. The bosses won’t admit it but there’s more to Combs than meets the eye, and that bigshot Richard Edwards knows something for sure. Ev would say it makes him a pessimist, but Colt just has that feeling, an ice-sharp truth learned in days spent dodging death. Getting honest words from Edwards and Everett both? Might be what kills Colt yet.

Everett Louisiana, 2018 “You know who you have to call, Everett.” Lead Detective Everett Kane sat at his desk with a single thought in his head, surrounded by files that looked like scrapbook memories. Because this Meyers case? Staging aside, it was Patrick Combs all over again. Major Stapes leaned against the open office door, face unreadable in the light of dimmed fluorescents. “I’ll be the first to admit I’ve no love for the bastard. And with how you all left things…well, there’s a bigger picture now.” A hard laugh escaped Everett’s throat. “He’s the one who saw that in the first place. Back then.” The major nodded, but didn’t look happy to agree. For all anyone ever said about “that nutcase outsider,” not to mention the legitimate grief he gave the bosses back in the day, it’d be easy to turn a blind eye and avoid an uncomfortable sight. But Major Stapes had a reputation for giving credit where it was due. He was the one who’d hired the bastard back when. He knew what he was asking Everett to do—again. The older man picked at peeling black letters that read E. Kane, Lead Detective. “Maybe so,” Stapes hedged. “But it doesn’t change the facts. Now that there’s another body…do it now or do it tomorrow, but you’re out of time. We need him.” Everett eyed the locked drawer of his desk. They both knew exactly who he meant, but Everett wasn’t stupid enough to go saying the man’s name aloud, even to the only boss who could halfway stand him. This case had conjured up enough old ghosts without adding him to the mix. Everett shook his head. “I’m not workin’ with him.” The major snorted, a paternal sound that made Everett feel like a kid complaining over chores. With his silver hair and well-lined face, Stapes often reminded Everett of his grandfather, though he wrangled small-town cops instead of stallions. He rapped his knuckles against the door. “Believe that’s the second time you’ve tried to convince me of that, Detective.” Shit. Stapes was right about that too. The fight fell out of Everett with a heavy sigh, leaving him hunched over the desk. He fixed weary eyes on the photo in front of him—a young woman in a State Rodeo T-shirt and a puddle of her own blood—cut up and dead in a way no person ought to be. One look at those photos and the petty wilted in his gut. Yeah. There’s that bigger picture to think on. He tried to rub the tiredness from his eyes. “I’m not gettin’ out of this, am I?” Stapes’ attention darted around the room—at the photos stapled over the walls, the files that littered every surface, the theories and timelines connected by string and too many cards to count. It made his point too well. “Not this time.” The major turned on his heel, leaving Everett to stew in his half-lit office. The station lights had long ago been dimmed, which made sense. Everett’s colleagues all had homes to be getting to. There’d been a time he had the same—a couple different homes, if he were honest. He clicked his pen twice, then chucked it at the desk. Broken pieces of plastic scattered to corners unknown. Fuckin’ Harkan. Why’d Colt always have to be right? Alone and accustomed to being so, he cracked the small window in his smaller office and blazed up a Camel filter. On a normal day, Everett was a strict only-with-coffee smoker. He was down to a pack a week when things stayed the right kind of average. But this one was peeling fast, half-gone from yesterday—a soft pack because fuck it, they weren’t gonna last long enough to matter. Not when the State Rodeo was once again the scene of a murder. And certainly not now the name Colt Harkan was playing on a loop in his mind… 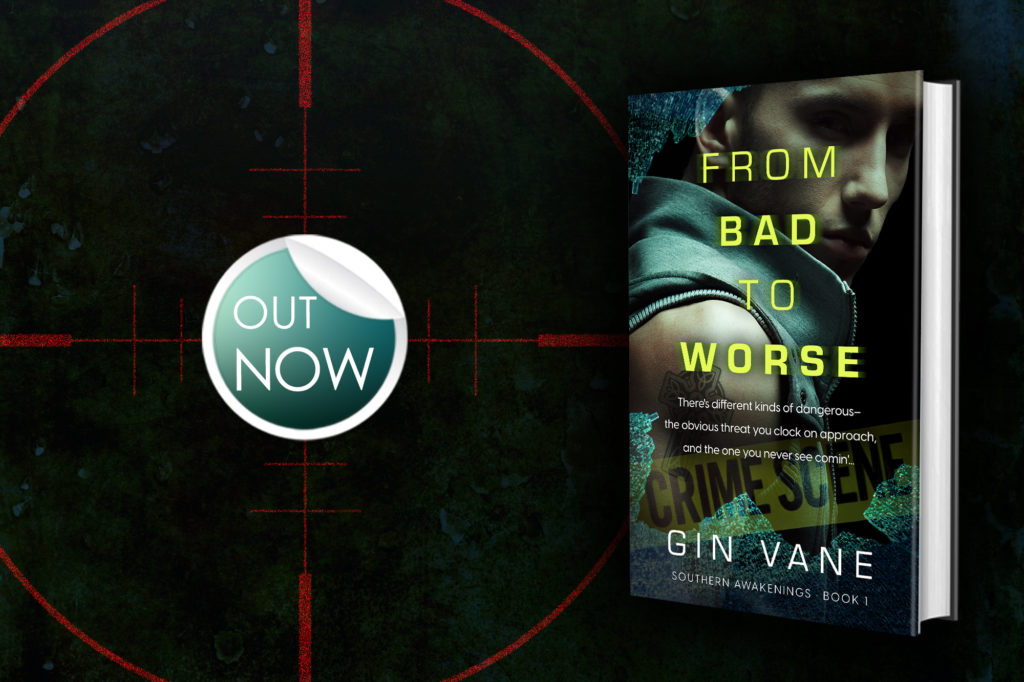 Gin Vane is your friendly neighborhood bisexual she / they, deconstructing heteronormativity one queer romance at a time. As a lifelong reader of the genre, Gin refuses to compromise plot for spice and lives by the motto “por que no los dos?” Gin primarily writes MM and MMF, though she enjoys reading and writing lesbian romance as well. Gin lives for the slow-burn that scalds and loves a good character redemption arc. Their novels are always full of heat and often include elements of polyamory and BDSM. When not at the writing desk, Gin can be found dancing at their pole and circus studio, knitting beside the most perfect cat, watching crime shows and Brit coms with her husband or cooking dinner with friends and partners. Follow Gin on Instagram and TikTok.