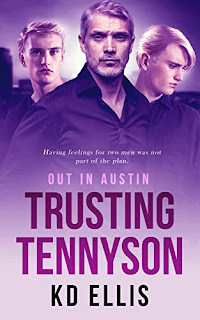 Trusting Tennyson
https://www.amazon.com/gp/product/B0B33CCGZ5
Buy for $4.98 or #FREE on Kindle Unlimited

Book three in the Out in Austin series

Tennyson thought this would be just another undercover assignment. Catching feelings for two traumatized men wasn’t part of the plan.

When FBI Agent Liam Tennyson was embedded in the La Familia cartel, he didn’t expect to meet not one but two young men whose terrified eyes haunt his dreams—and stir up feelings he thought long buried.

Asher Downs left his homophobic family behind the day he earned his high school diploma. With little more than a bus ticket to his name, he moves to Austin to meet his online boyfriend, Devon. Unfortunately for Asher, life doesn’t always go according to plan.

Misha might have been born as Dimitri, but now he answers to whatever name Master gives him. Snaring another innocent young man into this life is the last thing Misha desires. But Master gets what Master wants—and Master wants a matching set of toys to play with.

When a mole in the justice department compromises Tennyson’s identity—and jeopardizes his plan to rescue Misha and Asher—Tennyson is left with no choice but to go on the lamb. Can the two traumatized boys learn to trust him to keep them safe?

Next Up is Ellie Thomas