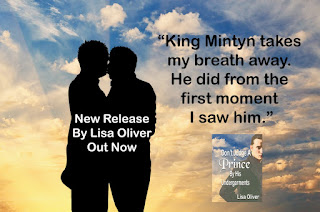 Don’t Judge a Prince by His Undergarments
https://www.amazon.com/dp/B0B9MZ9PBX
Buy for $4.99

The only goal Prince Syrius Fortune of Rosenhip had during his twin sister’s “meet the suitors” ball, was to stay quiet and out of the way. His sister’s event had been in the planning for five years, and he and his loving father had already agreed trying to seek a wedding contract for himself was not a good idea. Prince Syrius had quirks, and it wasn’t as though he needed to open himself up to ridicule from someone else, especially a spouse he would have to get to know. The event was only a week, and being a lot smaller than his older brothers, Syrius was used to not being seen. Until someone did see him.

King Mintyn of Marinkaw had been a soldier since he was fifteen years old. He was not impressed to find out the one time of the year he was supposed to be meeting King Fortune to sign their Golden Straits agreement was apparently the one time his friend decided to have a huge event going on. However, his aide told him he had been invited, and it was only one ball. Mintyn could enjoy some good food, network a while, and then leave the following morning once the treaty was signed.

That was until he saw a young vision being hassled by an entitled duke. On learning the vision being hassled was his friend’s youngest son, Mintyn decided to intervene. It was the nice thing to do. One shortened dance later as Prince Syrius walked away from him after he put his foot in his mouth, Mintyn told his aide to rejiggle his schedule. He had a spouse to woo.

This is one of those light stories that my muse weaves sometimes simply to make people smile. There are no deep and meaningful plot lines, just a bit fun between two men who look so unsuited for each other on the surface of things, but their pairing proves opposites do attract and stay together. It is in the same universe as the Infidelity Clause but is totally standalone (Don’t laugh my lovely readers, it is honestly, standalone). Watch for cameo appearances by a cupcake eating dragon, an episode of prince throwing, and potato cuffs.

This is an MM arranged marriage story with intimate situations described, along with strong language in places, and situations written for adults only. Please store your content responsibly.

Next Up is LM Fox