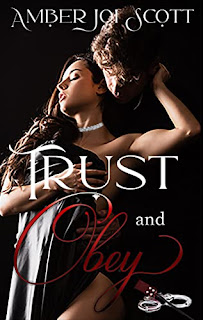 Abby is a twenty-two-year-old college graduate who has been coerced into attending two weeks of pre-wedding activities as the Maid of Honor for her best friend Livi’s lavish wedding.

She is also dealing with PTSD suffered at the hands of a Dominant in whom she had placed her trust. Her body scarred and her faith and trust shattered, she moves to pursue her dream job and start her life over again.

Leo is the thirty-eight-year-old brother of the groom, who has opened his home to his future sister-in-law’s Maid of Honor during the wedding festivities. As the groom’s older brother by sixteen years, he has established himself as a respected and affluent citizen and Dominant.

What happens when Leo meets Abby upon her arrival at the Steele compound, only to discover that her presence has uncovered a memory from not long ago?

What happens when Leo is immediately attracted to Abbey as a potential love interest and as a Dominant?

Is it possible that Abby’s trust in the community can be restored by a man she just met? Will she be able to return to the role of a submissive?

Abby and Leo are about to make several discoveries about themselves and each other.

Next Up is E.L. Rose