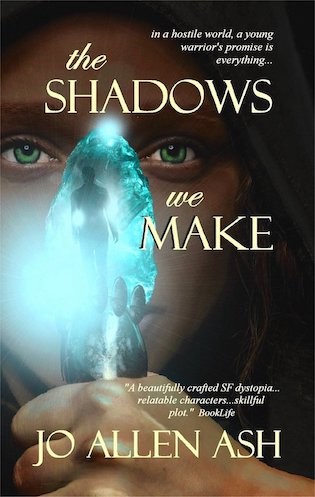 Grace Irese, sixteen-year-old desert warrior with a chip on her shoulder, is gifted in ways she does not yet realize. Duncan Oaks, teenage member of the Grif-Drif Con-Artist Guild, is a boy who has made one bad choice too many. When they are both remanded to an off-world juvenile facility with lifetime sentences. Grace and Duncan plot an escape into the horrific environment beyond in order to save Duncan’s sister from Grace’s war-torn world. Will they and their unlikely companions survive unscathed or find themselves forever altered?

Set in dark alien words and told in the first person with three separate voices, The Shadows We Make is a young adult tale filled with bravery, magic and the binding power of friendship.

A stench swirled on the winds as flames devoured ancient timber and more—so much more. I didn’t want to think about the more, but I drew a deep, desperate breath, coughed, spat on the ground, imagining the more despite my best intentions.

For fifty-one days, Citadel had been burning, filling the air with the smell from those faraway fires. Sitting with my back to the wall, knees drawn up to my chest, I studied the flames coloring the distant horizon like a rising sun. Ash traveled on the wind across the miles. Delicate, paler than sand, it settled on my arms, caught in my hair, dusted trousers and tunic. When I rose, my muscles had cramped. I stretched and listened. Voices drifted from neighboring dwellings as people came out to converge on the nearby common, assessing events, speculating about the emissaries who had ventured into Citadel, my parents included. They had not yet returned. As only a few days had passed, no one worried overmuch. At least not out loud.

I heard others speaking, too: strangers whose desert vernacular differed slightly from ours. I had no trouble understanding them. I had always been fluent in the various dialects, as well as the languages used within the city and elsewhere. It was my gift, to be so empowered. I supposed word of it had conferred on me the value which had caught Stone Tiran’s interest. My particular ability, and my warrior status.

I turn and spat on the ground again, this time in disgust.

Crossing the yard, the sand shifted beneath my bare feet. I had left my sandals on the doorstep. No matter. Who would see? And even if they did, I did not care. Rules, law, traditions, none concerned me the way they did my brothers, my parents, our tribe. I tried to keep my disdain to myself, but sometimes it leaked out, resulting in fury or an occasional, reluctant amusement among my family members. I had at one time wondered if my recalcitrance was the reason for their agreement to the bonding with Stone Tiran. The man possessed, after all, nothing to elevate our family. Indeed, the Irese clan was held in such high esteem the gain was to Tiran alone. Bonding was arranged between city dwellers and influential desert clans as a way to increase power, prestige. Stone Tiran possessed none of those with which to barter, and yet my parents had agreed to his request.

I resisted spitting on the ground again. It was a nasty habit I could well do without.

At the wall, I leaned my forearms atop warm stones, blatantly eavesdropping while I watched a girl with hair as dark as mine. We shared a birth anniversary, she and I, having been born the same day a year apart. She was now fifteen and I, sixteen. A wide lavender streak curved through her braid. Mine was the color designated to the Ser Irese, a blue as dark as midnight, identical in shade to the tattoo upon my left cheekbone. Mara had not yet received hers. Her warrior training was incomplete.

Snatching a tiny white pebble from beneath my fingers, I lobbed it at her. She jerked around, eyes flashing angrily until she saw me. She hurried over to the wall.

“Grace!”
I smiled. “Where have you been?”
“Practically under lock and key. I only came out today because I begged my uncle to let me accompany him.”
Yes, without her warrior’s status, she would not have been allowed to wander freely in the present circumstances. I nodded sympathetically.
“Where are your brothers?” she asked. She had her eye on the youngest. We plotted misadventures to get them together, but thus far had met with no success.

“When?” she cried, thinking of Connor, I knew. We had strange names, my siblings and I. They came from our mother. It was her blood which gave me my green eyes, my paler skin like bronze rather than the ruddy brown most possessed.

“Three days ago.”
“And they left you alone?” she demanded enviously.
“Of course,” I said, trying for nonchalance. I could not help adding, “Not totally alone. Ella is here.”
She flicked her fingers, dismissing Ella. I didn’t like when she did that. I liked everything about Mara except her dismissal of Ella due to her humble birth. Ella had been with us since my eldest brother’s birth. She was, to me, family.

Mara shrugged, glancing over her shoulder to the crowd on the common and back again. I narrowed my eyes at her.

I almost walked away, right then, but I stayed, watching her, listening to the others. “Mara, have you heard anything? I think communications are down.”

She shook her head. “They are, or so my father says. No one can get through to anyone who’s gone to the cities.”

Cold fire danced along my spine. I reached my fingers across the small gap between the wall and Mara’s shoulder, but she didn’t see them, her attention diverted by two men arguing. I didn’t know who they were. Several more stepped in, voices raised. I pulled my hand back.

“I can’t. My uncle is calling me.” I saw where she looked now, to her waving relative urging her to his side. “I’ll try to see you tomorrow, but you know how it is now.” She started to turn away, swung back to me, eyes on mine. “But how could I have forgotten? I’ve wanted to ask for ages now. Is it true? Tell me, quickly.”

I didn’t need to ask her meaning. Although my parents had attempted to hide what happened, secrets had a way of surfacing like worms working their way up through the soil in the garden. “Yes,” I admitted. “It’s true.”

Mara’s mouth dropped wide. “That can’t be.” “It is.”
“Once the contracts were negotiated—”
“I know.”

She stared a moment longer before wagging her head from side to side. “You’re a fool, Grace Irese,” she said, “a terrible fool.”

I flinched and she was gone, disappearing quickly into the gathering. Releasing a long sigh, I turned on my heel and went back inside, whisking my sandals from the step as I went.

Maybe I was a fool. It didn’t feel that way to me, though. I’d made a stand, angering everyone in the process, but I felt no shame in having done so. The first glimpse of Stone Tiran’s enraged countenance should, perhaps, have given me pause, yet somehow it hardened my resolve. His threats had made my final words easy.

I refuse the offer of bonding.

The deceptively simple ceremony promising me to a veritable stranger had been the next step, with the official ceremony to take place two years after, when I reached majority. Some girls welcomed it, worked on their wedding clothes during the intervening years with joy and anticipation. I couldn’t imagine why. I had never been able to imagine why.

I have been traditionally and self-published with books released by the former Warner Books, Kensington, and indie companies under my own name and pseudonyms. Once and Always (written as Alyssa Deane), was translated and sold in various European countries. I self-publish the Connor Falls Christmas series as Robin Maderich, but I have always wanted to return to writing for the young adult reader. Perhaps this is why The Shadows We Make, penned as Jo Allen Ash and my debut as a YA author, is the accomplishment about which I am most excited.

The Shadows We Make is a young adult tale of dystopian sci-fi/fantasy filled with complex and compelling characters. In The Shadows We Make, I burrow down into dark themes such as addiction, hopelessness and loss, countered by the strength and unexpected sweetness of forged friendships. The next book in the planned series, The Thrice-Gifted Child, continues where The Shadows We Make leaves off, with the same cast of characters and a few more besides.