Somewhere In Between by Liia Ann White

Book 1 in the Masters of Haven series 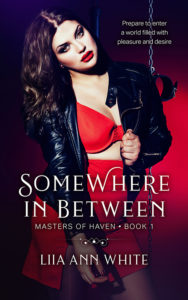 Amara entered the club and fought the sudden urge to flee. It had been eighteen months since she’d stepped foot inside Haven, Perth’s most exclusive BDSM club, and so much had changed in that time. This used to be her safe haven, the one place she never had to hide her true self. Where she could let go of her control issues and let her submissive side come out to play. Now, it was a strange place. It was somehow more daunting. She didn’t belong here anymore. With her best friend by her side, she signed in as a guest and handed over her completed waiver and membership forms. The dim lighting from chandeliers and wall sconces cast red and gold glows around the main room. The only well-lit section was around the bar. Everything spoke of darkness, pleasure and sex—the wooden flooring, darkly painted walls, exposed beams that held an assortment of chandeliers. There was no artwork on the walls anymore. Instead, they were decorated with an array of toys free for anyone to use. Even the position of the bar had changed. Now set against the far-left wall, the oblong wooden bar top sat as a feature of the room. Chains hung from the top beams and deeply set metal links were inserted into the wooden top. Perfect for naughty little submissives, she thought. A dance floor took up a small portion of the converted warehouse, and the rest of it was taken up by an array of black and brown lounges, armchairs and small tables. But there was plenty of empty space for play, for submissives to be splayed out as tables, as one man currently was. A Domme sat on a black leather lounge and had her boot-covered feet resting on his back. The look on the man’s face, that smile of pleasure and desire as he looked straight ahead while his Domme spoke to him… Amara knew that feeling well and missed it deeply. It filled her with envy. The familiar scents of leather mixed with sweat and sex invaded her nose as she inhaled deeply. The sounds of leather slapping flesh, bare hands smacking arses and cries of pain and pleasure were comforting. It had been far too long since she’d been involved in any of this. Despite her good reasons, she mentally kicked herself for taking such a long break. The atmosphere of the club called to her. She’d missed this, needed this. When she’d frequented it previously, it had still been a public club. Now, under new ownership, it was private and exclusive. She’d been lucky to get access to a temporary membership. If she hadn’t been helping with a demonstration, she wouldn’t be here at all. A hand touched her back and guided her towards the bar. Her friend Larissa gestured for her to take a seat on a red leather-covered stool and took a seat beside her. “Haven looks so different now,” Amara said as she looked around. “Yeah, the new owner did a complete renovation before he opened it up. He’s always changing things around, though,” Larissa said. “You’ll have to introduce me so I can thank him for allowing me in.” “I can’t believe he gave you a month-long pass. Good thing we vouched for you, isn’t it?” Amara regarded her friend with a small smile, despite the sadness and anxiety that filled her. “Too bad I won’t be using it other than tonight.” No matter how badly she wanted to, she wouldn’t be returning. She simply didn’t have the time. She was a twenty-eight-year-old woman with almost no social life. And wasn’t that just a little depressing? “You will be coming back next week. You promised me.” Larissa’s stern expression told her there would be no give on her promise. “Fine, I’ll come back next week. But after that, you know I can’t.” “I know why you say you can’t. I’m sure you could work something out.” Amara accepted her drink from the bartender, thankful for the interruption. She didn’t want to talk. Not tonight. Tonight was about her dipping her toes back into the old lifestyle she’d loved so much to see if there was still a spark there. Not that she expected to play with anyone tonight. Now that she looked around to see all the other women nearby, she realised it definitely wouldn’t be happening. They all held such confidence, self-assurance. Two things she was now severely lacking. What had happened to her? She used to saunter around confidently, knowing how to turn on her sexual appeal like a switch. Once upon a time she would have shown up in a latex skirt and a tight corset, sexy as hell. Now, she wore a multicoloured pleated skirt that was too short for her comfort and a tight black top that showcased her large breasts and veered attention away from everything else. She’d gained weight and had more fat rolls than she used to, bigger curves than she was comfortable with. In some spots, she was just plain round. She used to love her curves, the roundness of her belly, the mounds of her breasts, the softness of her thighs, but now… Now it was all too much. 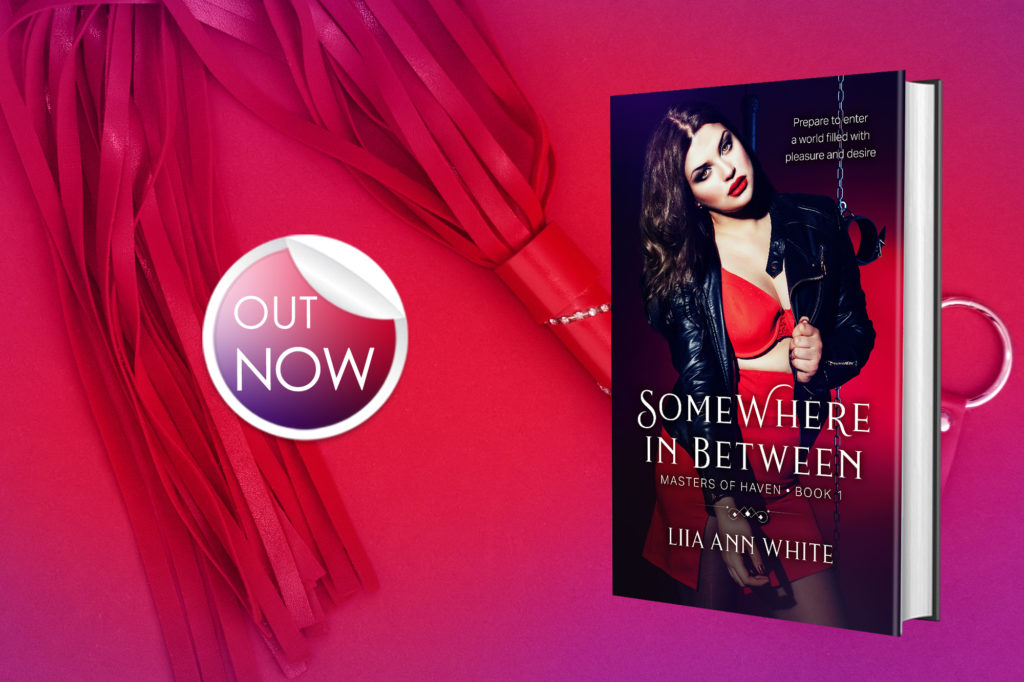 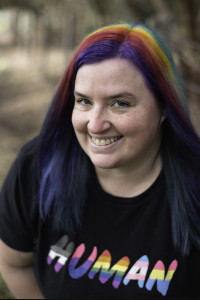 A born and bred Aussie, Liia hails from Perth, Western Australia. After spending her childhood years dreaming of far-off lands, she eventually discovered her love of romance and hasn’t looked back since. A self-proclaimed geek, she loves all things Disney and Star Wars. Being a bisexual, bipolar and ADHD battler, she is passionate about mental health and LGBTQIA+ rights, as well as advocating for animal rights. When not writing, she can be found curled up with a good book, with her two dogs by her side. Follow Liia on Instagram and check out her website.