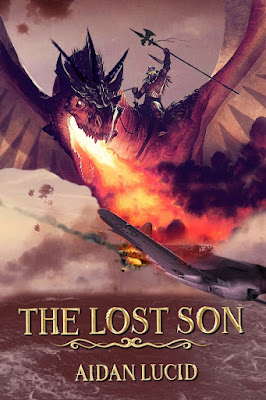 A Magic Coin. A Hidden World. An Incredible Adventure!When Henry Simmons unearths a coin with mysterious powers, it’s clear that his life is soon to change . . . but not how he expects. After using the charm to woo Tracey Maxwell, Henry finds himself launched to another dimension – a world in which the human race is mercilessly hunted down by creatures called Sadarkians. This hellish realm, Zargothia, could scarcely be less safe.Transported together, Henry and Tracey meet two mysterious strangers and a garrulous cat. Pressing forward, they learn that they’ve been charged with saving the people of Zargothia, but freeing King Argoth along with his people means facing ruthless overlords and almost certain death.Vastly outnumbered, can Henry and his fated friends surmount the odds? In such a realm of wicked magic, danger lurks at every turn . . . and nothing is what it seems.

Chapter One
November 5th, 1945
Many thousands of feet above the Bermuda Triangle, the TBF Avenger disturbed the blue sky’s silence. Captain Edward Johnson, aged forty, and his friend, Sergeant Conor MacCall, thirty-seven, crewed the dark-blue Torpedo bomber. They flew without a bombardier because they did not expect any action. This was a routine patrol for the naval air station in Fort Lauderdale, near Miami.
“It’s a good morning for flying. The one thing I haven’t missed these last two years is the miserable weather back home,” said Conor in his strong Glaswegian accent.
“I agree with you on that one,” Edward replied in his Oxford drawl, his brown eyes surveying the area around him. He had dark-blond hair and a blond moustache.
Sitting in the rear of the plane, controlling the turret gun and radio, Conor pushed back his carroty hair and turned his green eyes towards Edward.
“Do you ever think about home?” Conor asked.
“All the time,” Edward said with a slight trace of loneliness.
“What do you miss the most?” Conor pressed further.
Edward thought for a moment before answering. “I miss my parents. Every Sunday, Sandra and I would take the kids and visit my folks, staying for a few hours. Sandra loved my mother’s baking. Mum always fussed over the children.”
“I suppose you miss her baking too, sir, eh?” Conor chuckled as he asked this.
“Well, I suppose I do. But there’re better opportunities over here, so we had no choice but to move.”
“Aye, I’ll second that. I miss meeting the lads on a Saturday for a wee game of footie and then the few pints after. I’ll tell you this much, one thing I don’t miss is shooting down Germans over London.”
“True, true,” Edward agreed.
He scanned the area once more, satisfied that there was no present danger.
“I suppose we’ll head back,” Edward said. “Radio the station to all-clear the area.”
“Aye, sir. I’ll get right on it.”
Twenty minutes from base, a brilliant white light exploded out of nowhere, engulfing the sky as far as they could see. Sound burst around them, ricocheting with memories of bombing raids, flak and fire, the uncertainty of survival, deafness isolating each man in his real and recalled fear, never knowing if they would make it back. The light intensified, burning their retinas.
Shielding their eyes didn’t help much.
As suddenly as it arrived, the light disappeared.
“What in blazes just happened?” Conor said, blinking.
“Your guess is as good as mine,” Edward replied.
Both Conor and Edward’s headphones suddenly burst with static as they received a transmission from base.
“Fort Lauderdale to FT-4, do you read me?”
“This is Fox Tare Four to Fort Lauderdale; we read you loud and clear. What’s the problem? Over,” Conor replied.
“You got two unidentified bogies closing in on your position. Three o’clock.”
Conor shook away the last of the retina burn and looked again. With a second glance, he saw them approaching.
“Roger that, Lauderdale. Bogies spotted. FT-4, out.” His headphones crackled as Lauderdale was cut off.
“Sir, I know this may sound strange,” he said, turning to Edward, “but they don’t seem to be planes coming towards us.”
“Of course they are. What else can they be?”
Conor shut his eyes and squinted, focusing harder. As he looked again, he became slack-jawed.
“I think they’re …” He swallowed the unreality of the thought. “They’re … black dragons. And there’s someone riding them.”
“This is no time for jokes,” Edward barked.
“I’m not joking. They’re gaining on us. Break left!”
“Don’t be daft. There’s no such—” Edward stopped as he, too, saw what Conor had seen.
“My God!” he exclaimed in awe. “Bloody hell, how’s this even possible?”
Edward snapped out of his momentary, shock-induced paralysis. “Hold on!”
The TBF Avenger swooped down. The dragon followed. Opening its large mouth, it belched fire and narrowly missed the TBF Avenger’s tail.

Aidan Lucid began writing in 2002 after having a spiritual experience. Since then, his works have appeared in national and international poetry anthologies, magazines and e-zines. Lucid first began working on The Zargothian Saga trilogy while recovering from a horrific accident in 2005.Aidan released The Scavenger — a horror novella — in January 2021. The first book in the Hopps Town series, it received many positive reviews. He followed that up with Unlucky Charm in January 2022. Book three of the series, Dark Secrets, will be released in February 2023.Mr Lucid is working on more sequels to The Zargpthian Saga.In his spare time he likes to meditate/pray, listen to music and go to the movies with his wife, Claire.