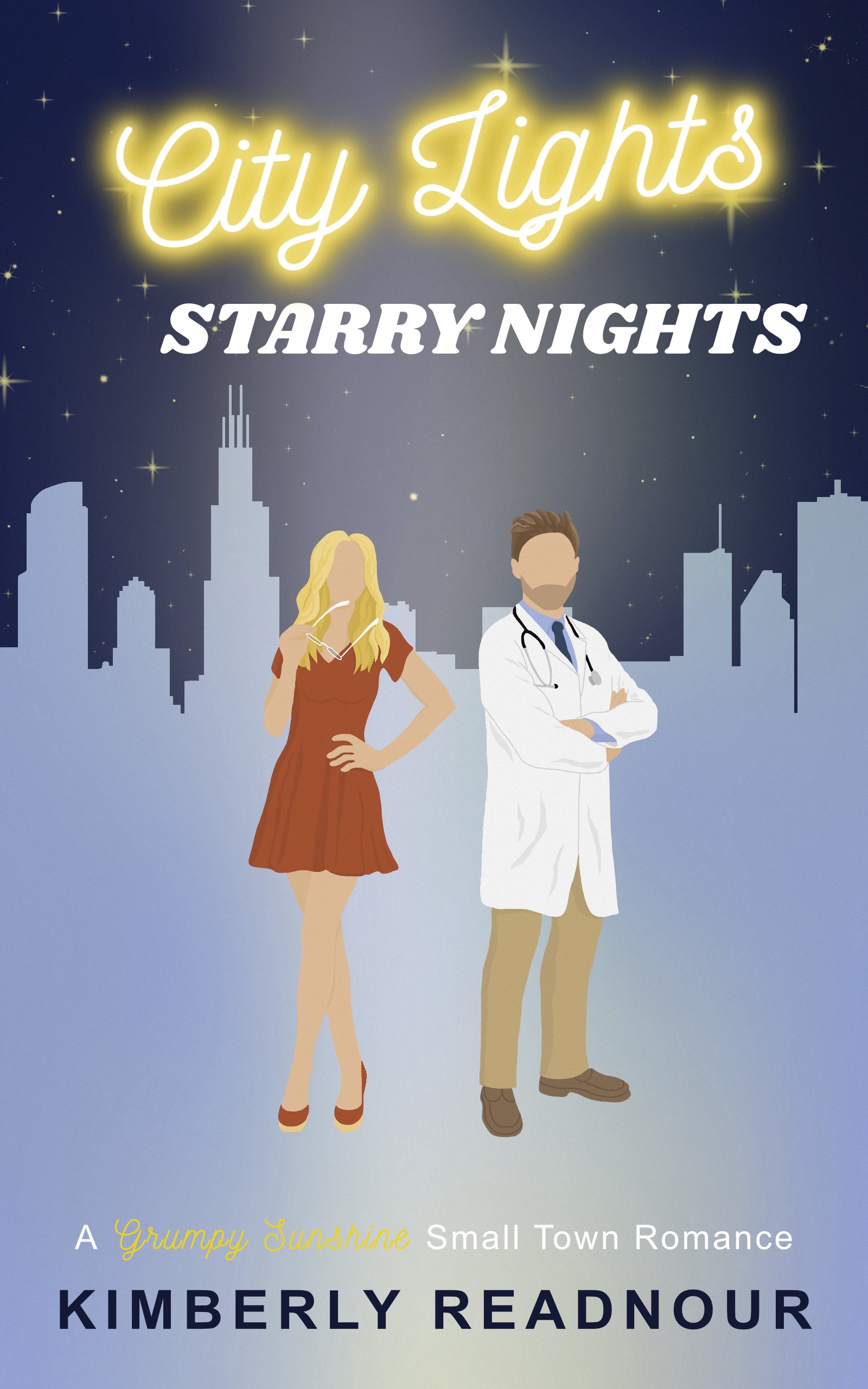 That is until her friend from college convinces the older brother to hire her.

The job is in Sugar Creek Falls, a small town in the middle of farm country—the complete opposite setting for this born-and-raised city girl.

But when she arrives and learns her new boss is the same gorgeous guy who got her fired, sparks ignite.

And not the good kind.

This job is just a means to get where she wants—a stepping stone to bigger things in bigger cities.

Or that’s the plan.

Until their chemistry can no longer be ignored and Liam teaches her skills beyond office management.

When life shifts in Evie’s favor, her past catches up. Surprises and unveiled threats become real. And she finds herself facing choices where neither of them wins.


City Lights, Starry Nights is a fish-out-of-water, small-town romance featuring a spontaneous heroine and a grumpy, domineering doctor with a heart of gold. But grab those fans because these two heat up the pages! Guaranteed HEA. 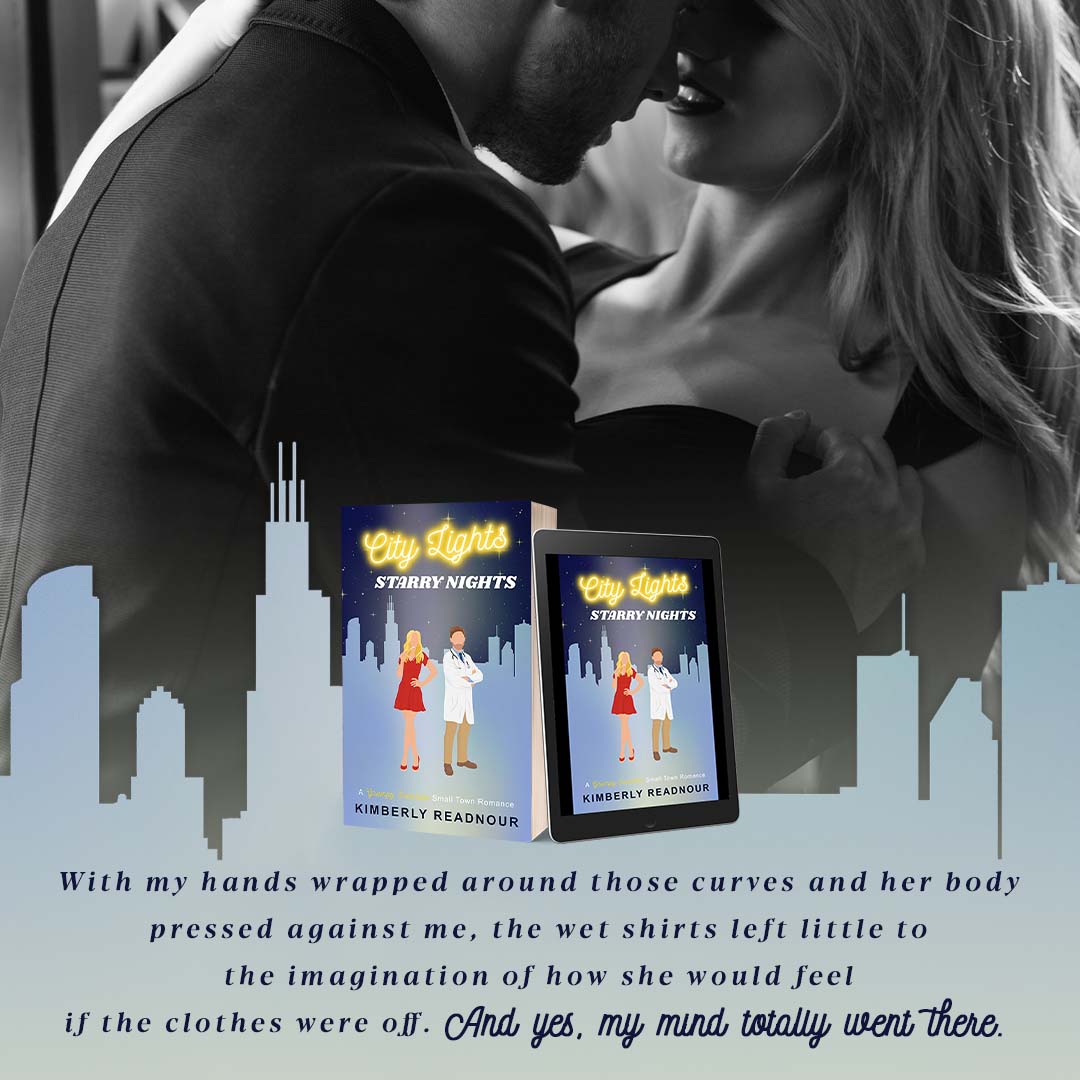 “Evie, stop.” Liam’s voice booms behind me, but my feet keep moving, chewing up the concrete from the table to the bathroom. Embarrassment and anger clash together in a fuel-filled rage. How dare he talk about me like that to his friends. Who does he think he is? It’s not as if I’m sitting around pining after his ass. I get his friends teasing him, but for him to use my age or my friendship with his sister as an excuse after what we did… that’s despicable.

I pick up my pace and let his pleas for me to wait fall on deaf ears. I just need to escape. We’ve spent the last forty or so minutes eyeing each other. I thought maybe he, I don’t know, felt the same connection between us that I did. There was a definite shift back at the office during Mr. Cusack’s visit. I hadn’t imagined that look he gave me. And his grumpiness toward me lessened a while ago. I was having fun. We were having fun. That is, until a few moments ago.

Maybe I am a child because believing the grumpy doctor could see past the surface of a rich damsel-in-distress is nothing more than a childish fairy tale.

I almost reach the bathroom door when a large hand grips my elbow.

“Wait,” he commands, halting my progression. Whipping around, I intend to glower but falter when I face him.

Damn those long legs of his for catching up to me.

Damn that defined jaw that weakens my knees.

And damn those regret-coated eyes currently fixated on my lips.

Lips that very much want to taste that mouth of his again. I sense my anger dissolving. Not wanting to say anything I’ll regret, like admitting what his touch does to me, I narrow my eyes into what I hope is a glare and step back.

He sighs and erases the gap between us, his woodsy scent enveloping us. “You took what I said the wrong way.”

“Really? I think you made yourself pretty fucking clear tonight and Tuesday night.”

“You know what I don’t understand?” I press, not giving him time to respond. I’m in no mood to hear excuses. “I don’t know how you can look at me one minute, as if I’m your next breath, and then push me away at the mere suggestion of us being together. Your Dr. Jekyll and Mr. Hyde routine is giving me whiplash. So, forgive me if I misunderstand whatever bullshit you’re trying to peddle.”

Liam’s eyes close as a pained expression crinkles his features. His fingers tighten around my forearm with the right amount of pressure to show his dominating presence, yet gentle enough that it doesn’t hurt. I hate the rush of heat that shoots straight to my core. This entire scenario shouldn’t be a turn-on, but damn it, there’s no denying how soaked my panties are right now.

Why does he have this effect on me?

His eyes reopen to the most profound jade I’ve seen in them yet. They grab hold and pin me to my spot. I barely breathe as desire flickers through his irises, only to be doused by the ever-present reasoning. I steel myself for the onslaught of excuses for not being with me, as if the mere thought is such a horrendous concept.

“What I like… my preferences…” He shakes his head, as if that would help clear his thoughts, but I don’t understand what he’s trying to say. Irritation flashes in his eyes as he growls, “You and I being together is a bad idea.”

“Why?” I toss my free arm in the air. “What makes it so horrifying?”

His jaw tics. No matter how angry he may be, the confusion lies heavily in his hardened gaze. Laughter trickles into our bubble, snapping our attention back to the bar. Realizing we’re about to be outed, Liam nudges my arm and drags me down the hallway until my back is flush against the wall between two unmarked doors. Shadows cascade around us, cocooning us into darkness. When the two girls enter the bathroom, Olivia and Jeanette come out. I hold my breath until they’re out of sight before turning back to those eyes boring into me. I want to attack those lips and claim them as mine, but I’m still furious. We won’t be attacking anything if he doesn’t explain to me why we can’t relieve this sexual tension between us.

“Why is the thought of being with me so horrible?” I ask again.

“I don’t think being with you would be horrible.”

“Then, what? Because something is preventing you. I know you feel whatever this pull is between us. It can’t just be me. What is it?”

He slams his palms against the wall, caging me in. His body towers above me, chest heaving. His voice comes out low and gravelly as he says, “If we caved, it could never lead to anything.”

Even though I know that to be true, I didn’t expect the pang of hurt hitting my chest like a direct bullet. But regardless of what the future holds, there is something between us. I feel it down to my bones. I’ll be damned if I walk away from here without exploring it.

“You know what I think?” I ask but don’t give him time to respond. “I think you enjoy being miserable. I think you’ve spent years hiding behind interning and focusing on your practice, so you won’t have to face reality. Because once you do, you’ll realize how unhappy these past few years have been. And if there’s anything I’ve come to realize in this short time of getting to know you it’s this—Dr. Seymour doesn’t like to waste time. And that’s what sticks in your craw the most—all the wasted time spent with the wrong woman.”

The entire bar fades to the background as his gaze bores into mine.

Holy shit. Did I just slam his entire past relationship?

My mouth opens, but before I can utter an apology, he rasps, “Damn it. I can’t stay away from you.”

The next thing I know, Liam’s hold tightens, and he shoves us into a darkened room as the words, “I fucking want you,” slice the air.

One of Five eARC’s for City Lights, Starry Nights

Kimberly Readnour lives in the Midwest with her husband, two children, and a very fluffy cat.

Having a true passion for romance and HEA’s, she took the leap from the young adult genre to romance and never looked back.

Unexpected Love, book two of the Unforeseen Destiny Series, is a #1 Amazon Kindle bestseller in the Medical Romance. Her series, the Bad Boys Redemption, has spent many weeks on the Amazon’s sports fiction bestseller’s list.

Kimberly worked as a Registered Nurse for fifteen years before hanging up her stethoscope. When she isn’t running her own business, you can find her tucked away writing.