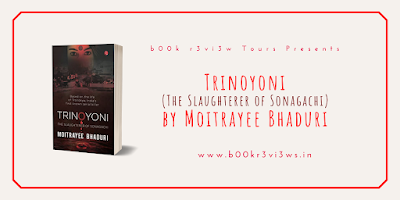 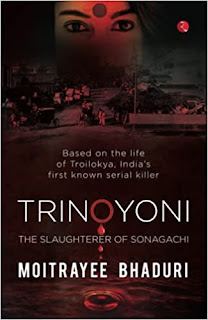 ‘Someone is stalking the streets of Sonagachi.’
It’s the 1870s, and Calcutta is bustling with commerce and colonialism. A sea of changes has been ushered in by the relatively new British Raj, which has led to migrants from all over India filling up the city with their hopes and dreams.
Amongst these struggling masses is a serial killer on the prowl. Corpses of sex-workers start turning up at ponds and in the by-lanes of Sonagachi, Calcutta’s famed pleasure district, choked to death and stripped of all their ornaments. Fear has gripped the city and the nascent police department seems to be chasing shadows.
This is the story of Trinoyoni Debi: a sensuous seductress with a silver tongue and a love for all things shiny. But behind those eager eyes lurks a savagery that has made Trinoyoni the stuff of legends. How could such a breath-taking beauty be so terrifying? How many more will she kill before she is satiated? And is there anyone who can stop her? Follow her life as she transforms from a child widow to a famed courtesan and merciless murderer, becoming India’s first-ever serial killer.

Read an Excerpt from Trinoyoni

On a scorching summer noon in 1853, a tired Priyogopal Sanyal entered Purnendu Shekhar Chattopadhyay’s house, wearing an irritated look. The 50-year-old Sanyal had travelled a long distance and could barely sit straight. His drowsy eyes and half-broken walking stick made him look much older than his age. He was chewing on a betel leaf and behaving rudely with his hosts.

People crowded around the house, inquisitive to learn about the man who would be marrying the prettiest girl in the village. Trina managed to catch a glimpse of the man and felt disgusted. She was appalled and couldn’t understand why God had chosen this tragic destiny for her.

‘Jamai babu was bedridden for two years because of a life-threatening disease, ’Trina overheard her neighbour saying.

‘Even in his bedridden state, he married four girls and rescued them, ’Priyogopal Sanyal’s friend, who had accompanied him, informed Purnendu.

With folded hands and a lowered head, Purnendu Chattopadhyay said, ‘Our daughter is very sensible and compromising. She excels at all household chores. She will not give you any reason to complain. I am grateful to Sanyal babu for rescuing her and agreeing to marry her.’

Tears trickled down Trina’s eyes as she saw her father begging Sanyal.

‘Priyo babu has rescued ten other girls too. But your daughter is much older than his other wives, ’Sanyal’s friend remarked scornfully.

Purnendu looked at the groom apologetically and pleaded, ‘I am an unfortunate father, burdened with the liability of an unmarried daughter. But as a Kulin Brahmin, I couldn’t commit a sin by marrying her off to a non-Kulin gentleman! Please forgive me.’

Sanyal’s friend added, ‘Priyo babu will accept the dowry and marry your daughter tomorrow. He will leave for East Bengal soon after to see his newborn son. Your daughter can continue living with you for now. You can complete the remaining rituals during his next visit.’

Purnendu nodded with folded hands and said, ‘We are truly blessed to have found him.’ 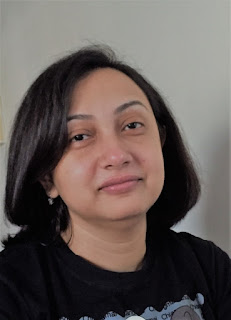 Moitrayee Bhaduri is an author, screenwriter, and content specialist. Her first book, The Sinister Silence (Srishti Publishers, 2015), is an edge-of-the-seat murder mystery that introduced the feisty private detective Mili Ray. Her second book Who Killed the Murderer? (TreeShade Books, 2019) is a fast-paced psychological thriller that revolves around the murder of a TV actress in a beauty parlour.

Moitrayee also writes screenplays for TV and freelances with IT firms as a content consultant. Before switching to a full-time writing career, she worked with organizations like IBM, Deloitte, and Oracle, among others, in various writing and people-managerial roles, for 15 years. An alumna of Loreto College and Jadavpur University, Moitrayee also has a certificate in Creative Writing from the University of Oxford.

Moitrayee enjoys conducting writing workshops for children and adults, encouraging them to cultivate a habit of reading. She is passionate about music, enjoys reviewing books and films, and loves dogs. Currently, she lives in Kolkata.