Series: Knights of Blackrabbit, Book One

One year ago, Vince Knight walked away from his role as crime lord of Port Knot. In his absence, the gangs he founded went to war, and frightening new factions have risen from the ashes to tear at the town’s throat like hungry wolves. Now Vince is back and has taken command of the Watch—working side-by-side with the very people who spent years trying to put him behind bars. Unbeknownst to him, Captain James Godgrave has been given his own team to deal with crime in the town, but while he and Vince share a common goal, they are not allies. The murder of one of James’s crew puts Vince in a delicate position. Facing pressure from the council, the townsfolk, and the Watch itself, Vince must find the killer because if he doesn’t, James will, and Vince’s tenure as Watch Commander will be the shortest in history. As Vince and James clash in their public and private lives, Vince starts to understand the damage caused by his abdication as crime lord, James sets about putting down the gangs once and for all, and the mysterious power behind the new factions exacts a terrifying plan that will change Port Knot forever.

These Young Wolves Glenn Quigley © 2022 All Rights Reserved He clicked his pale, meaty fingers twice, sending Crabmeat running along the narrow Entry while he hurried up the dry, cobbled road. He readied himself at a corner and stuck out the tip of his octopus-handled cane. A young man with a thatch of blond hair slammed into the cane at full speed, turning head-over-tit onto the cobbled road. A necklace and a handful of coins spilled out of his pockets, splashing into a horse-made puddle. Crabmeat—a tubby, short-nosed little bulldog—darted after him, barking furiously. The young thief rolled onto his back, holding his shin and crying out, before being lifted wholly off the ground and slammed against the nearest wall. Vince Knight spoke with a voice like rolling thunder, “Assume you know the way to the Watch House?” No one in the town of Port Knot could remember a warmer October than that of 1781. As the hazy sun rose in a saffron sky, the harbour stretched its cranes like waking arms and prepared for another day. Already several tall ships had docked and become targets for hungry gulls searching for scraps. The briny air, awash with the stench of yesterday’s catch, stung Vince’s nose in a familiar and welcoming way. With his bag over his shoulder, he took the thief by the scruff of his neck, and marched deeper into town. The crowds of traders, dockworkers, and sailors sundered themselves before him and fell quiet when he drew near. He kept his head down and carried on walking. He no longer needed the aid of his cane but thought it added some sophistication to his appearance, especially given his newest acquisition of a patch over his left eye. Had he not already towered over the townsfolk, his clothing would still have set him apart. Sartorially speaking, he never truly overcame his brawler beginnings. His cream-coloured top shirt had seen better days and his black trousers had long ago begun to fray their edges. Yesterday, he’d attended his brother’s handfasting on the nearby island of Merryapple, and he’d accidentally left his favourite claret overcoat behind. Not that he needed it that morning. His tricorne cap, cracked and scaly in places, covered his snowy white hair and kept the morning sun from his lone icy blue eye. Port Knot’s sole Watch House sat at a crossroads on the west side of town. Three storeys tall, it had a low front door painted in cornflower blue and a single window set with rusted iron bars. Above these, the sand-coloured bricks rose to an arch and then to a gable, in a wholly unnecessary architectural flourish. Like most buildings in town, thin copper pipes ran across the surface like veins under sallow skin. The bridges of Port Knot infested the town like rats. Long, short, arched, flat, and each one different from the last. Lickbeer Bridge connected the road above Vince’s head to the first floor of the Watch House and protruded from the side of it like a hernia. The arch had been carved to resemble the open mouth of a bearded man, swallowing all who travelled through. As with the rest of the town, the Watch House had been built too close to the surrounding premises, and indeed the entire street had the appearance of an overstuffed bookshelf. Within, Vince found a grimy pit of browns and mustards. The Watch House saw hardly any sun, so a plethora of lanterns fought bravely against the gloom. Vince all but threw the thief onto a chair. “Stay,” he said, pointing. “Or else.” Crabmeat sat in front of the thief and growled. Vince let his bag of clothes slump to the dusty floor. He tapped his octopus-handled cane on the knotted wooden floorboards. “Anybody in?” A voice from a backroom called out to him and presently a slim, dark-haired woman in her early twenties greeted him. She wore oversized tan trousers held up by braces, a striped shirt splattered with oil, and a pair of goggles perched on top of her head. She gripped a hammer in one hand and scowled. “Got you a present,” Vince said, nodding to the thief. “Ah, sure that’s very kind of you, altogether.” She raised the hammer a little and steadied herself. “And who might you be, now?” “Vince Knight. Watch Commander.” 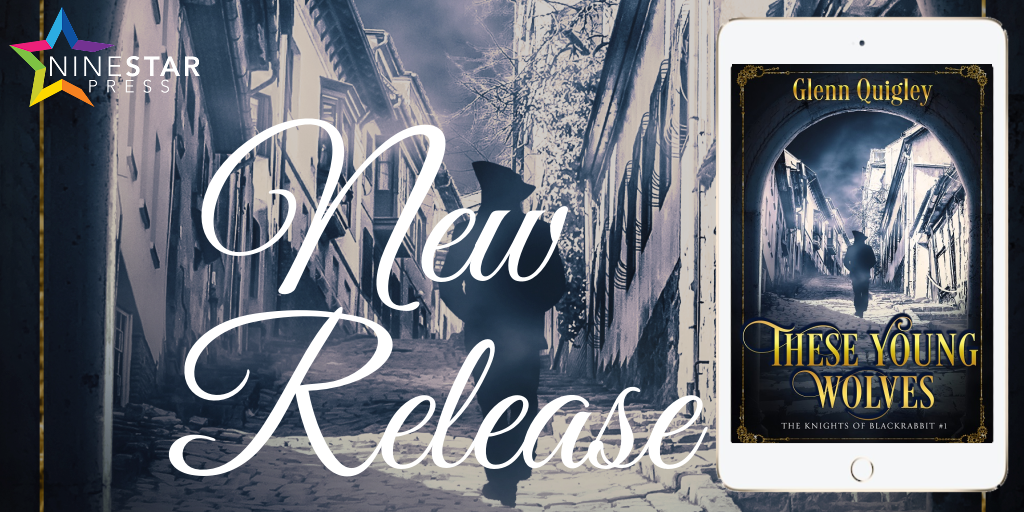 Glenn Quigley is an author and artist originally from Tallaght in Dublin, Ireland, and now living in Lisburn, Northern Ireland with his partner of many years. His first novel, The Moth and Moon, was published in 2018. When not writing, he paints portraits in watercolours and tweets too many photos of lighthouses. He maintains a website of his latest work at http://www.glennquigley.com.