Orion was born to a wild werewolf pack that spent more time as beasts than men. That changed when he met an elf of the Redwood, Thalanil. For the first time in over a month, the timber wolf felt compelled to return to human form when he sensed the presence of his mate. Thalanil had never thought to be bonded to a werewolf, of all things, though he wasn’t about to question the fate given to him by the Earth Mother. When he returned to his military duties, he had a new mate in tow. Together, they found a home with their spec ops team and a purpose in life. Now, as the holdouts of the Inquisition have been rooted out one by one, the team has been called upon to aid in their destruction once and for all. With Shaw and Marcus returned, it should be a quick and easy job. Except, dark magic like they have never seen before lurks around every corner. Their only hope to survive might be found in a trio of powerful mate bonds and the magic of their tribe.

An Elf’s Fate Casey Wolfe © 2022 All Rights Reserved Birds shot through the canopy, squawking indignantly, as Thalanil slid down a vine past them, rather than use the rampways. He laughed, adjusting his gear once his feet touched the soft earth at the base of the large redwood tree. He took a deep breath of the fresh morning air, unable to stop the smile from coming to his lips. People greeted him as he passed through the lively marketplace. Thalanil promised them all they would talk later—he didn’t often get leave to come home. For the time being, he wanted to go out into the woods. He’d missed A’netheas. He’d missed the people and his family. But he’d missed the Redwood most of all. The recurve bow on his back was perhaps an old-fashioned weapon; however, tradition was important to the elves, and thus all elven children were taught to use one. Not everyone stuck with it, but for those like Thalanil, their natural reflexes and keen eyesight made them excellent at it. That skill wasn’t overlooked by the military either, Thalanil becoming a master sniper. The trees welcomed him back like a long-missed friend, their colorful leaves changed with the cooling temperatures. Thalanil traversed the treetops, hopping from one limb to the next and using branches to swing into neighboring trees. Soon, he found himself deep within the Redwood. Deciding to take a break, he found a comfortable-looking branch, stretching his legs along the length as he sat with his back to the trunk. He looked out at his surroundings, the sun cutting through the leaves, and sighed in contentment. He rested his head back, feeling the bite of bark, and listened to the wilderness around him. Damn, I’ve missed this. It was good to be home. A’netheas had changed little in his time away. Not that he expected it to. If anything, it was a comfort to be somewhere familiar after so long away, sent from place to place as a member of Calagon’s Special Operations Division. The elven city seemingly came out of nowhere when traveling through the forest. They had cleared little land, instead choosing to build vertically into the trees for the most part. They did not have city walls or traditional borders. It was simply the way they were. That wasn’t to say they hadn’t moved with the times—far from it. They used hydroelectric technology and solar panels to power their city. Satellites connected them to the outside world. They might have lived simple lives, but they were still very much a part of the global community. Allowing himself to be lulled into a state of peace, Thalanil wasn’t sure exactly how much time had passed when he heard the approach of several good-sized animals. He had heard birds and smaller game, even a few deer, but these beasts were altogether different. Curious, Thalanil sat up, legs dangling on either side of the branch. Sure enough, in the distance, he could see a pack of wolves moving between the trees. They were at an easy trotting pace, those in the lead putting their muzzles in the air to scent—a hunting party. Thalanil immediately clocked that these were not mundane wolves. Their larger stature pegged them as their werewolf cousins. Considering there were only so many predators in the Redwood, and no other packs to speak of, Thalanil felt safe assuming this was the infamous feral pack well known to his people. Even a century old, Thalanil had only come across them a few times in passing. An unspoken pact between the Redwood Pack and the elves of A’netheas saw that they stayed out of each other’s way. The werewolves didn’t stray near the city, and the elves gave them a wide berth in whatever hunting grounds the pack was using that time of year. The pack lived a nomadic life, never seeming to stay in one place very long. It made any attempt at reaching out to them difficult. The fact they lived a majority of their time in wolf form didn’t help matters either. Thalanil watched the group move closer, knowing full well they scented him in his perch. It appeared none of them were worried about a lone elf, choosing instead to keep moving in search of whatever prey they were tracking. Surprisingly, one of them stopped. A tawny-colored wolf with black along his back gazed up into the trees. Eyes landed on him. The wolf stared for a moment before releasing a high-pitched whine. Then, to Thalanil’s complete shock, the wolf went down to the ground and rolled over to reveal the cream fur of his belly. 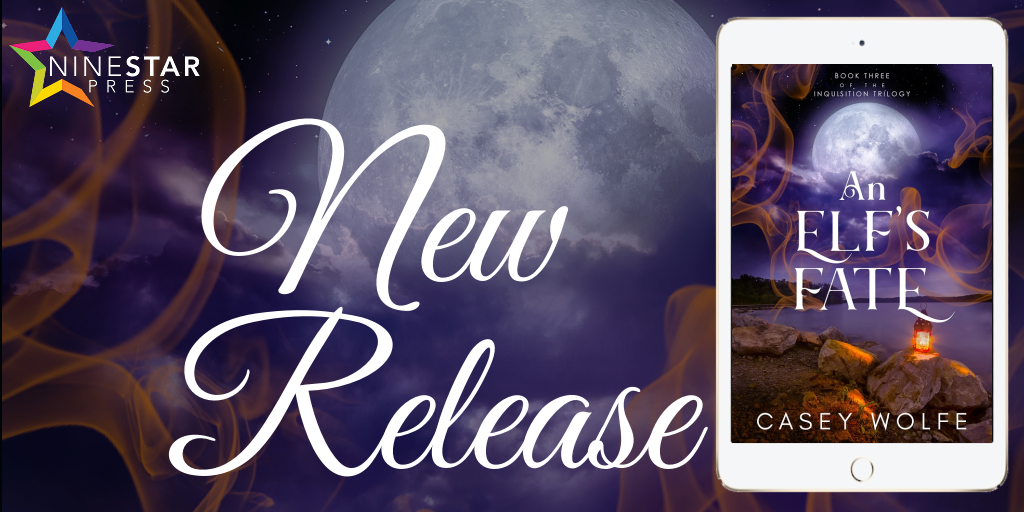 “Everyone deserves a Happily Ever After.” History nerd, film buff, avid gamer, and full-time geek; all of these things describe Casey Wolfe. They prefer being lost in the world of fiction—wandering through fantasy realms, traveling the outer reaches of space, or delving into historical time periods. Casey is non-binary and ace, living with depression, anxiety, and PTSD, all of which informs their writing in various ways. Happily married, Casey and their partner live in the middle-of-nowhere, Ohio with their furry, four-legged children.