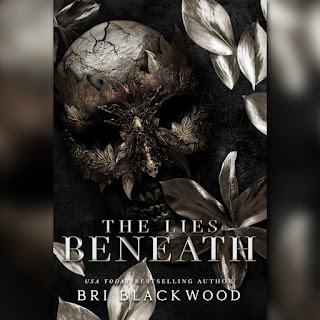 The Lies Beneath by Bri Blackwood releases on February 28th!
A DARK FORBIDDEN GOTHIC ROMANCE
https://geni.us/TheLiesBeneathBB
FREE with Kindle Unlimited

Privilege has its secrets…

Westwick University is known for its prestige and pedigree for hundreds of years.

Many people would die to come here…

And some have come here and died.

There are lies buried within these walls that the world doesn’t know about.

It’s what happens when your family has gone to the same college for generations.

Stories and secrets are passed down, making me yearn to know more.

I’m determined to discover if each and every one is true, but I’m distracted.

Because my new professor has taken a particular interest in me.

Or so I think.

I shouldn’t be tempted because anything with him is forbidden.

But the way that he only has eyes for me has set me on edge.

I can’t tell if there is something there or if I’m making it all up in my head.

Why would a billionaire, who is known for his solitary life after the death of his wife, want to teach here?

There’s so much I don’t know.

But I know that lies do nothing but lead to more lies.

And when I uncover the truth, the world will implode.

The Lies Beneath is the first book in a dark forbidden gothic college romance duet that has enemies-to-lovers themes. This book may not be suitable for all readers due to dubious situations that might be triggering. It ends in a cliffhanger.