Rory has never been the kind of person who enjoys fights or violence, but when a member of his newfound family is kidnapped, he will not just stand by and do nothing. No, Rory will use his still new and not entirely welcome magic to help. And when that is done, Rory will once more put all his efforts into becoming a trophy mate to his handsome blue husband, and he will worship said husband from the tips of his horns to his paw feet. Inkiri has never been happier in his life. His human mate accepts him, and not just that, Rory loves him. And while Rory seemed afraid at first, he will stop at nothing to protect the people near and dear to him. All Inkiri can hope is that he will prove himself worthy for such an extraordinary mate. With his future life as trophy mate almost within reach, Rory might be forgetting something that he has to do, but that’s okay. There are people in his life now who will remind him of all the things that are important and of all the things that aren’t. Content warning: While this series is a comedy, this book alludes to physical and sexual abuse. It is not experienced on page, but it is a reality of a side character’s life.

All rights reserved. Copyright ©2023 Alexa Piper Rory It would be fine, I told myself, everything would be fine. I could do this. Once, but not because I would die the first time. I was going to be brave this once, because someone I cared about was in trouble and needed help. Starting right after we had Kinnek back, I would stop caring about people, because I would ask the presence if it would turn me into a shrub, a really fancy one with tiny berries and no attachments whatsoever. And of course, when I wondered whether shrubbery was in fact a goal I could aim for, I wondered whether Inkiri would mind. If I were a shrub. The presence was mildly amused, Inkiri locked eyes with me and told me he would protect me, and Vergis squeezed my hands to let me know I needed to do magic. “Dispense,” he mumbled, because that’s what he’d started saying since sometimes, I got distracted and didn’t… dispense right away. Fudge, but if it had been anyone but Vergis’s dad we were going to save, I would have told Vergis that I was not an effing paper towel dispenser. Get us close to where Kinnek is, I told the magic even as I mentally waved it over to power up Vergis. The presence — the land — acknowledged that, and off we were. There were ten of us, all told. Vergis, Inkiri, and Lissir were the ones the land cared about most, I felt that. It also cared about Charles, either because he was Vergis’s dad or because he had already come to protect me once during the raspberry incident that had ended with Charles revealing he had a bunker and my guys liking the concept so much they’d imprisoned the cola asshat in there. It is good he is here since two of your knights stayed with your mate’s blood, the land told me as we hopped through the veils. Well, okay. The land could be prickly if it didn’t like a person, and it didn’t like that Zeddira was requiring medical attention. You need to protect everyone, though, even Luëris and the other protectors, I told it. Remember, no bloodletting. Remember how I told you such a thing is not within my power, Rory. We are here. Here was not the dark camp made up of tents and orc-like Koa Esher with a cloud of doom looming above I’d expected, but instead a very fancy estate. It was almost a castle, from the size of it, from the gray, ivy-encrusted stone I spied from where we’d arrived… which was a golf course, one of those sandy pits, and the castle was right across a small and no doubt artificial lake, framed by formerly neatly groomed trees that had taken the chance and were growing wild now, with mistletoe in the upper branches. The lawns that were supposed to be perfectly green and flawlessly mowed were mottled, grasses growing there now and making any games a thing of the past. “Where?” Charles asked. He was calm and held his gun as if he was ready to use it. He was. And he might. Violence might happen. I needed to get used to the idea. The other protectors and Inkiri closed in around me and Vergis immediately, and Lissir unsheathed one of his sickle-like swords. He got a look in his fiery eyes that I’d not seen there before, and his mouth pressed to a thin line. I turned to the presence, and it reacted immediately. I will guide you. There are many of them here, a lot who have the strange magic. I started walking where the land was pointing me — toward the extremely large house or small castle — but Inkiri stopped me. “Tell us.” 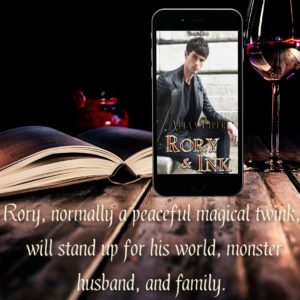 Alexa (she/her) has a lot of characters living in her head and wanting their stories told. Many of these people get snarky and won’t stop complaining if Alexa is too slow writing them, which means that for this author, sleep is a luxury. Consequently, Alexa is a coffee addict, but she is sure she has it under control (six cups of coffee are normal in a morning, right? Right!?)