Title: Off the Record

Freelance journalist David Cronkwright needs to finish a magazine article to avoid being evicted from his apartment. The subject is Nic Leduc, a younger, queer filmmaker on track to win an Oscar. But when David gets to Montreal, Nic refuses to be interviewed. Instead, Nic drags David all over the city—to his stylist, to a karaoke night, to a hiking trail on a mountain. Nic takes him to a party where David realizes how lonely Nic’s success has made him, that perhaps, what they both need is to learn to trust each other.

Off the Record Kelly Rand © 2023 All Rights Reserved David was sitting in Zaphod’s Restaurant, waiting for his Big Breakfast of three eggs, three pieces of bacon, and the best home fries he’d had in his forty-four years. That was when his cellphone rang. Ivy sat across from him, telling a story about a client who wanted a photo shoot with a leopard-print background, while wearing that same leopard print, and she’d had to perfectly align the two to fit the creative brief. Her mouth hung open midword, and David glanced at his phone. It was a Montreal number, so it had to be Nicolas Leduc. “Sorry,” he said. “I have to take this.” Then, into the phone, “Hello?” “Yeah, is this David?” The voice on the other end didn’t sound French at all, more like a midrange California accent. “Yeah. Is this Nic?” “Listen, I’m having second thoughts.” David’s heart sputtered. His eyes must have widened because Ivy leaned closer, making a circle with her hand like she needed more information. GQ had hired him to write an article about Nicolas Leduc, a twenty-six-year-old Québécois director who everyone expected to be nominated for an Academy Award. The Canadian committee still had to choose his film as the country’s foreign language entry, but Leduc had won the Palme d’Or at the Cannes Film Festival, so it seemed like a formality. David had a last-call notice from his landlord on his table back home, the result of a freelancing dry spell, and the GQ article was the only income standing between himself and eviction. “Why?” he said. “It’ll be fine. I’m heading out there today.” “I’m just not that into doing interviews right now, that’s all.” David stammered and found his words. “But it’s great publicity. It’s exactly what you need leading up to the awards. It’s a major magazine.” “I know.” Leduc went silent on the other end, and David imagined a clock ticking. This was the second conversation he’d ever had with Leduc outside of email. The first was when he got his hands on a press pack for Leduc’s latest film, Elle, and called the number. Instead of getting a public relations person, he got Leduc’s personal cell. Leduc had been riding north in the passenger seat of a convertible at the time. Through the howl of the wind, he’d agreed to an interview scheduled for some time next month. Now, that interview was tomorrow. “We’ll go at your pace,” David said. “Whatever you want to talk about, we’ll talk about. It’ll be great. I promise.” During the next pause, the server brought their breakfast, and David smiled and waved his hand before she walked away. “It’ll be great,” he repeated. “Okay. But I don’t want to meet at my place. I want to meet at my favorite restaurant. It’s called Les Crêpes, near Mount Royal. You can google it, right?” “Yeah, yeah, I can google it.” David searched his pocket for a pen but didn’t have one, so he repeated it. “Les Crêpes. Same time?” “One p.m. See you then.” And with that, Leduc hung up. David exhaled. “Jesus. I thought he was going to cancel.” Ivy smirked, tapping some salt onto her home fries. “He’s difficult. Terry says he is.” Terry was Ivy’s new husband, a camera operator who worked on Canadian movies and TV shows. His last job had been on a Sarah Polley film. Ivy’s first husband had been David. “He’s flighty, I guess,” she continued. “He’s demanding, and he changes his mind a lot.” “Well, he can’t change his mind about the fucking article.” David stabbed his eggs and put a forkful in his mouth. He was thankful Ivy still did breakfasts with him. Terry came sometimes, too, and sat, quiet and polite, as they talked about their families or the days when they’d worked in the same Toronto Sun newsroom. When David first made eye contact with Terry in one of Zaphod’s emerald-green booths, he’d watched him for some sign of jealousy. Terry had just smiled and asked questions like Who will be in your next article? Ivy had told him that David was gay. She’d never specified, but it was inevitable. David had told Ivy himself in the last year of their marriage as they’d sat on a bench in a park near the Danforth. I’ve never dated a guy. I’ve never kissed a guy. But I’m forty-four. I know. “Leduc will be an interesting article,” David said. “Have you seen any of his films?” “Oh, yeah. His films are great. Which ones have you seen?” “All of them. Research. I’d seen a couple already. I think, The Key to Infinity.” “Everyone’s seen that one.” Leduc had seven films so far, starting with the one he made when he was seventeen that premiered at the Director’s Fortnight at Cannes. He’d released them at a nearly annual clip ever since—cascading dominoes of stories about a young gymnast who was transgender; dueling mothers wanting to take control of a child; a mathematical prodigy who holed himself away, à la the Unabomber, and established a romantic relationship with the kindergarten teacher living next door. Each film included a colorful montage that made audiences wipe away tears. David had seen Elle in a tiny art house theater at Yonge and Eglinton, sitting in the back with his long legs stretched out, looking over fifteen heads in front of him. When the gymnast, Persephone, broke down in a hospital hallway, collapsing from emotional exhaustion, he’d folded and unfolded the napkin in his hand, tightening his jaw to prevent tears. When the lights came on, he’d wished Greg was there. 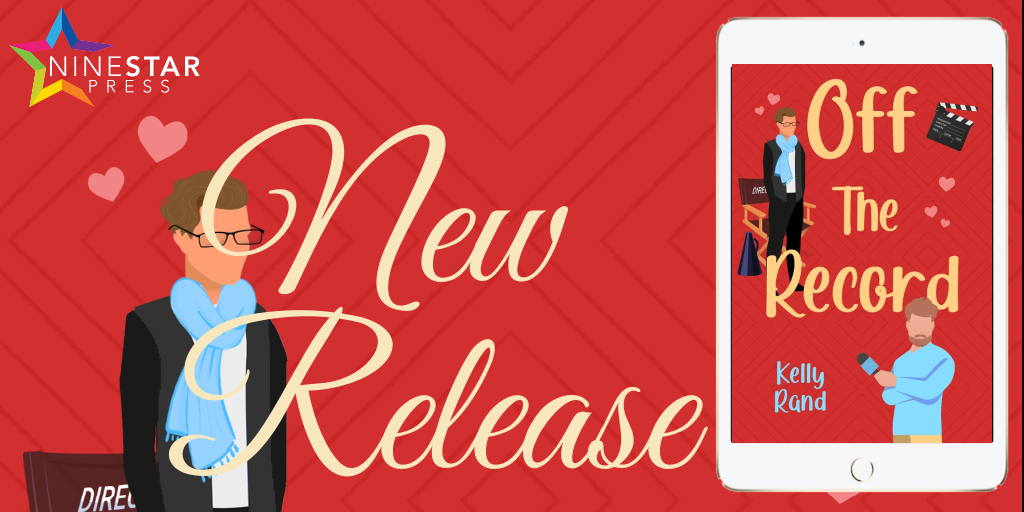 Kelly Rand is the author of Off the Record and several LGBTQ romance novellas. Originally from Norfolk County, she’s now a journalist in the Toronto area. Her previous jobs include farmworker, wedding photographer, and cashier at KFC. Kelly has been published in various anthologies and literary magazines and can be found at kellyrand.net.