The Giveaway runs from

While all of the authors with stories in the giveaway will be attending the GRL Retreat 2021, there may also be additional authors who were unable to participate.

I thought I made a deal with the devil. Turns out he’s a fallen angel. Very fallen.
When I meet him, my life is circling the drain. My job is going nowhere, my boyfriend is a jerk, and I’m in debt up to my eyeballs.
So, when the dangerously seductive mafia don offers me a deal that will solve all my problems, I take it.

Not entering the giveaway? Preorder a copy for only 99¢: https://geni.us/MarkoftheFallen
TO ENTER THE ARC GIVEAWAY:
1. FOLLOW Eve on BookBub: https://bit.ly/3yZBmoj
2. COMMENT below with a screenshot of your follow.
3. For a bonus entry, answer this question: what would you make a deal with the devil for?

That’s it!
**Facebook is not responsible for this giveaway. No purchase necessary to enter. Open to anyone age 18+ with a Kindle device or the Kindle app. Prize will only be provided by direct-to-Kindle delivery. Winner must provide a Kindle e-mail address to claim prize and must and add @ellewoodspr.com to teir safe-senders list. Giveaway sponsored by the author in partnership with Elle Woods PR and hosted by this page. Giveaway closes on or before August 4t, 2021.**

Can the man of your dreams make working for him a nightmare?

Gracie & Jaxson are coming February 25th and you’ll definitely want this gorgeous paperback on your shelves!

Head on over to Goodreads to enter this Giveaway for a chance at a signed paperback of MY SAVING GRACE! There are 5 copies up for grabs!

Grace VanRyan has her life mapped out.

Law school, a career with ABC, and a bright future ahead of her.

Until Jaxson Richards steps into the picture. He’s everything she hasn’t planned for.

And her new boss.

When the passion between them explodes, will her life blow up along with it?

FREE to read on Kindle Unlimited 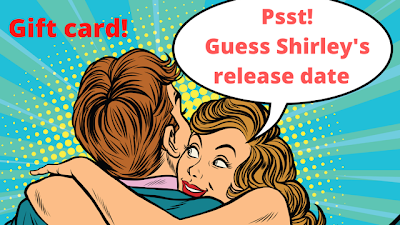 BOOK 2 IN STARTING OVER SERIES

Win a $25 Amazon Gift Card and an e-copy of Eat Your Heart Out.

Everyone who correctly guesses the date will get one entry into the draw.

Bonus entries (following Shirley on various socials) will up your chances to win.

This book is so brand new it doesn’t even have a cover yet!

When a tyrant in stilettos replaces her beloved boss, and her ex snags her coveted job, teacher Dana Narvana discovers there are worse things than getting dumped on Facebook. Time for the BFF advice squad, starting with Dana’s staunchest ally, Alex—hunky colleague, quipster, and cooking pal extraordinaire. But when the after-hours smooching goes nowhere, she wonders why this grown man won’t make up his mind.

Alex Bethany’s new lifestyle gives him the confidence to try online dating. What he craves is a family of his own until a life-altering surprise rocks his world. Knowing he’s sending Dana mixed messages, Alex panics when he thinks he’s blown his chance with his special person. From appetizers to the main course will these two cooking buddies make it to dessert?

“So this is what it’s like being on a date with you,” she said. “Oh.” Hesitating, as if she’d caught herself. “This isn’t a date, is it? Oh, I’m not belittling your gesture, bringing me to this fine establishment. But it isn’t a date because you’re still seeing that woman, the one you asked me about. You remember, don’t you? During our planning session.”

A ping of discomfort as he recalled asking Dana how to recognize the signs that a woman was interested. What could be more awkward? This. This was definitely up there on the list of more awkward moments.

“Honestly, I didn’t think too much—I mean we’re friends and colleagues.” He picked up his wine glass. At this rate, he’d have to order a second bottle simply to block his mind from where it persisted in going, Dana-wise. That little flash of skin, her show of bravery on the supervisor-from-hell front, even her feistiness toward him. Well, she had a point about the date.

“You’ve always been straight with me,” she said. “Do it again, be straight.”

Alex leaned in, took the piece of bread from her hand and placed it on the plate, then pushed the plate out of the way. “Come closer,” he said. “I want to whisper sweet somethings in your ear.”

Shirley Goldberg is a writer, novelist, and former ESL and French teacher who’s lived in Paris, Crete, and Casablanca. She writes about men and women of a certain age starting over. Her website http://midagedating.com offers a humorous look at living single and dating in mid life, and her friends like to guess which stories are true. Eat Your Heart Out is the second book in the series Starting Over. Middle Ageish, the first, is available now. Her characters believe you should never leave home without your sense of humor and Shirley agrees.

Want a chance to win 1 of 2 paperback copies of The Ghost of You by Tori Fox?

Want a chance to win 1 of 2 paperback copies of The Dangerous Son by Zoe Hill?

☆☆☆ SPRING FLING BOOKBUB FOLLOWER GIVEAWAY!! ☆☆☆
#ENTER NOW ♥ https://kingsumo.com/g/k28zl4/spring-fling-bookbub-follower-giveaway and follow the participating authors on BookBub for your chance to win!!

➡ 13 SIGNED PAPERBACKS FOR ONE LUCKY WINNER!!! (US Shipping Address only!!) ➡ And over 100 runners up will receive an ebook from a participating author!!

ENTRANTS WILL BE SIGNED UP FOR EACH AUTHORS’ NEWSLETTER. YOU CAN UNSUBSCRIBE AT ANY TIME. ENTRANTS MUST HAVE A US SHIPPING ADDRESS.
EBOOKS WILL BE SENT TO THE WINNER VIA BOOKFUNNEL.
CONTEST CLOSES ON APRIL 8TH
#giveaway #contest #signedpaperback #ebooks #prizes #100sofprizes #entertowin #enternow #kingsumogiveaway #signedpaperbackgiveaway #authors #indieauthors #supportingindieauthors #bookbub #bookbubfollowers #follownow #winbookprizes

S R Dyble is giving away free copies of KIT & EVES to members of her group!  You can get yours here: https://bit.ly/Srsbooks
KIT is the first book in the Carsonbrother series, you can check out both books here:

For your chance to win…

A signed paperback copy of Something Blue- A dystopian romance standalone, PLUS tons of Kristy Nicolle Swag AND my complete works direct to your kindle…

Facebook is in no way responsible for this giveaway.