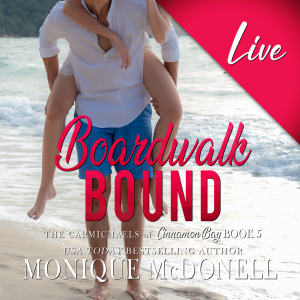 #newrelease #availablenow #romance #booklover Title: Boardwalk Bound (The Carmichaels of Cinnamon Bay Book 5) Author: Monique McDonell Genre: Contemporary Romance Release Date: November 10th #buynow https://books2read.com/u/mgzGXR Add to your #tbr https://bit.ly/32pJNv3 Blurb ↓ What happens when your greatest ally turns out to be a perfect stranger? Welcome back to Cinnamon Bay, where the neighbors know your business and one sip of the Cafe Amour can make you fall in love. If you believe in that kind of thing. Award winning actress India Rose Carmichael hasn’t been back to Cinnamon Bay for more than a day in years. When she should be celebrating the peak of her career, she’s wondering how she landed herself with a cheating ex—who was also her manager! Looking to escape Hollywood, she turns to the director of the Cinnamon Bay Film festival, who she’s been corresponding with for a few years, and offers him a deal: hide her away for two weeks, from the media and her erstwhile family, and she’ll help promote the festival to bring in tourists and money. Finn Jameson should have said no to India Rose, but the high school vice-principal, and part-time film festival director, knew she must be desperate if she’s looking to him for help. What he forgot to factor in was that having one of the world’s most beautiful women in his home would prove more than a little tempting, especially when she’s also sweet vulnerable and very much alone. When the world and her estranged family find out India Rose is in Cinnamon Bay their relationship goes from friendship to fake romance and the lines between dreams and reality become blurred. Everyone has an opinion on what should happen between them, if only they all agreed. Can a small-town guy and a big time actress find a way to build a love that will last? Fans of Brenda Novak, Nora Roberts, and Robyn Carr will fall head over heels for this delightful beachy romance. Delve into a new world of romance, mystery, and magic in the quirky coastal town of Cinnamon Bay, North Carolina. Scroll up and one-click to start reading BOARDWALK BOUND by USA Today bestselling author Monique McDonell today! #BRVL
Follow Book Review Virginia Lee Blog on WordPress.com