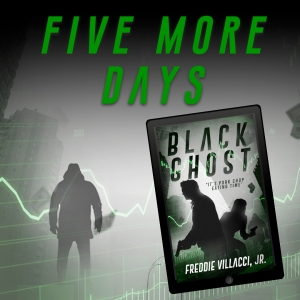 ⏱ Black Ghost Countdown ⏱ Black Ghost by Freddie Villacci, Jr. will go LIVE in 5 days! Add to Goodreads → https://www.goodreads.com/book/show/54818498-black-ghost Pre-Order → https://books2read.com/BlackGhost BOOK INFO: Title: Black Ghost Series: Black Ghost Author: Freddie Villacci, Jr. Genre: Thriller Release Day: December 1, 2020 ABOUT THE BOOK: Mysterious deaths. No clues. No witnesses. All undeniably linked. Two rookie agents. Bic Green, the Black Ghost, is on a mission to take out America’s ten wealthiest citizens. That’s simple enough for someone with his skill set, but that’s not the only thing on his mind. Haunted by his personal demons, the trained assassin thinks he’s found a way out of this life through his niece. He hopes funding her quest to find a cure for cancer will absolve him of some of his most egregious acts, but that can’t happen until he completes his list of kills. With only twenty-one days left, he’s running out of time. Law enforcement members are baffled by the cases and haven’t yet noticed the connection. But when two rookie agents overhear key details of the plan, they’re immediately invested. Against their better judgment, and despite their superior officers’ insistence, they press forward. What they uncover is more disturbing than they’re prepared to handle. As the clues are unraveled, the stakes couldn’t be higher for Agents Maddox and Foxx, and Bic’s sudden quest for morality may be nothing more than a pipe dream. Can the agents solve the case before he executes another rage-filled, ritualistic murder? #BlackGhostCountdown #FreddieVillacciJr #ComingSoon #Thriller #Suspense #TheNextStepPR
November 16, 2020November 16, 2020 Book Review Virginia Lee Blog

★✩★ READ IN KINDLE UNLIMITED ★✩★ Discover what secrets unravel in this drama suspense novel Melita By Gill D Anderson Purchase links: US https://www.amazon.com/dp/B08D66WSBF/ UK https://www.amazon.co.uk/dp/B08D66WSBF/ CA https://www.amazon.ca/dp/B08D66WSBF/ AU https://www.amazon.com.au/dp/B08D66WSBF/ Available in KINDLE UNLIMITED BLURB: As the only child of a single parent, and with little knowledge of her father or her paternal relatives, Emily struggles with identity issues throughout her childhood. Her mother’s past and family history have always been shrouded in secrecy. Moving from Scotland to Vancouver, Emily hoped to start a new life and reinvent herself, but she unintentionally becomes estranged from her mother, Melita, during the process. The tension between Melita and her daughter that has built throughout the course of Emily’s life finally comes to the surface. Slowly, the truth about Melita’s harsh childhood growing up in Malta unravels, revealing the inevitable impact it had on Emily’s upbringing. Will the dysfunctional familial patterns remain entrenched forever? Or can Melita and Emily find a way to reconcile with the past? @Gill D Anderson author @Ds_pr_Services #Suspense #drama #kindleunlimited #Books #keepreading #romance #booknerd #reading #booklove #booklife #bookaddict #indieauthor #kindlereads #bookish #fiction #romancereader #bibliophilelife #Melita #authorsofinstagram #readers #bookbloggers
Follow Book Review Virginia Lee Blog on WordPress.com