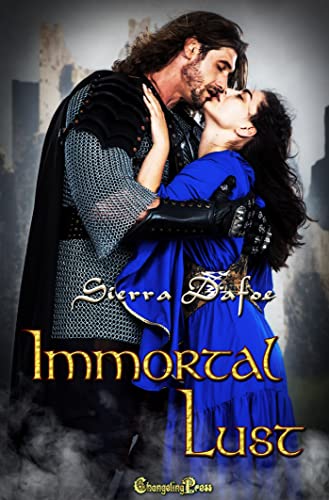 For years, Raymond du Sable has chased rumors of a woman shrouded in legend, a woman of unearthly, hypnotic beauty. Finally, on Crusade, he finds her. She is Cytharea, daughter of Aphrodite, irresistible to mortal man — and Raymond’s key to grasping the throne of France. To transport her there safely, Raymond hires a Templar Knight, Gerard d’Amiers.

Sworn to chastity, Gerard has a deep mistrust of women, born of the infidelity of his boyhood love. Yet Cytharea stirs him in a way no woman ever has. And Cytharea herself is battling a deadly imperative — she must feed from the sexual energy of a man soon, or die.

Together, Gerard and Cytharea discover a passion so overpowering it shakes the very foundations of Gerard’s faith. Upon reaching France, he must abandon every vow he’s ever made or lose Cytharea to the abusive ambitions of a madman. 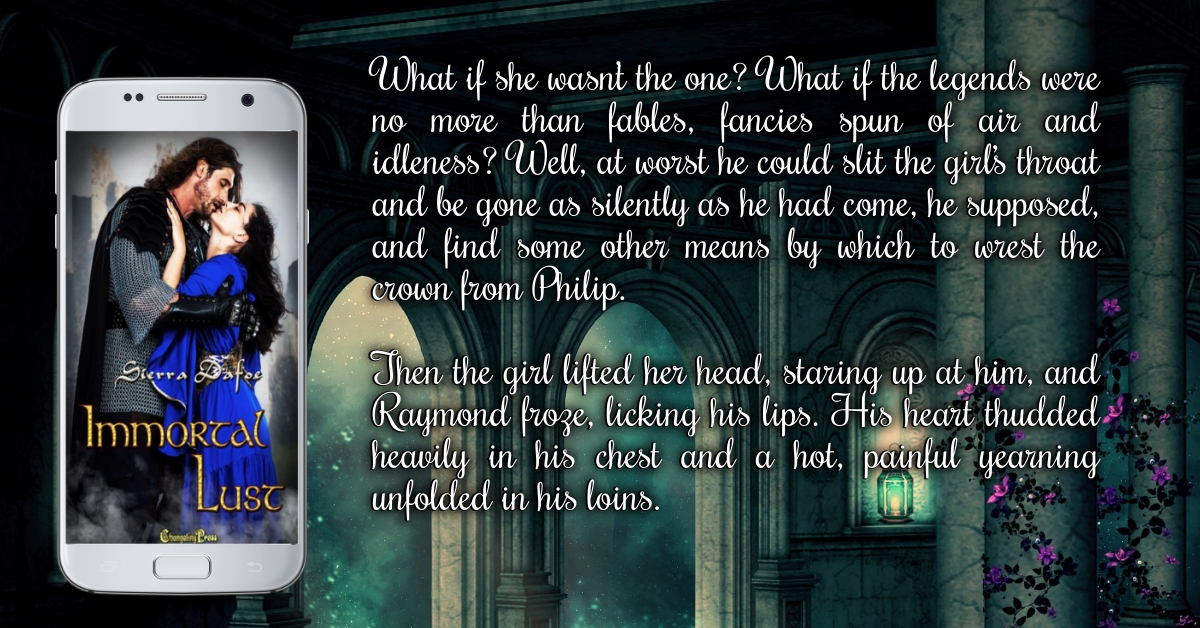 In the hot, stinking dust of a desert night, Raymond du Sable crept closer to his goal across sands soaked with the blood of battle. Over four hundred men had died today, Saracens and Christians both.

But tonight, Richard of England and the infidel Saladin exchanged gifts of courtesy. Chilled fruits served on crushed ice, transported hundreds of miles from the mountains of Mongolia, delicate embroidery and lace carried all the way from Britain. The sheer wealth required to bring such items this far staggered Raymond.

But that was all right — he would have such riches soon enough.

He grinned in the darkness, thinking of the monarchs in Richard’s pavilion. Bent over a game of chess perhaps, or enjoying the wailing of zurnas that the Turks considered music. They played at chivalry while Christians bled and died to reclaim the Holy Land from the godless Turks.

Fools, the lot of them.

He himself had no interest in the Crusade or its goals. He had accompanied his cousin on this fool’s mission for one reason and one reason only. And that reason lay just ahead in a heavily guarded tent within Saladin’s encampment.

Only fools and infidels would bring their women to war.

No doubt his cousin Philip was with the others in Richard’s pavilion, chafing likely as not at the intricate shows of royal politeness. A vain, pious, unimaginative man, Philip, just thick-skulled enough to be dangerous.

Did such a man deserve to hold the throne of France?

Raymond thought not. Thrones and crowns belonged to those with the strength — and imagination — to take them. He grinned again, keeping his lips closed so that the flash of his teeth in the dark wouldn’t betray him.

There were two guards along each side of the large tent, with two additional men stationed at the entrance. Raymond had no intention of gaining admittance through the front flap. No, his quarry was here, housed toward the back of the large, opulent tent that housed Saladin’s hareem — a fact he had paid a pretty penny to learn.

But it was worth it. It all would be worth it.

He had discarded his armor in favor of stealth and speed, yet despite its absence he felt invulnerable, almost divinely protected. The first guard fell easily to his knife and the small, secretive, almost sexual excitement he always experienced while doing murder sang along his veins. It was so different from the crudity of killing in battle — there was no finesse in that, no private thrill. As the second guard started to turn, Raymond slipped behind him and slashed his throat.

Blood spurted across the sand, black in the gibbous moonlight, and Raymond stared at it a moment, picturing it as a sacrificial offering to whatever gods there were. Truly, he could almost believe in the old gods tonight. There was a tension in the air, a sense of fate, of destiny…

Cytharea. Her name whispered in Raymond’s mind with all the potency of legend. Quickly he slashed a gap in the side of the tent and slipped through it, finding himself in a small, enclosed space.

Cushions were scattered about the floor, and a single brass lamp dangled from a chain overhead. By its soft amber light, he could see the girl cowering back against the silken blue stuff that made up the far wall. Her dark hair tumbled down, obscuring her features. The thin fabric of her raiment barely concealed her body. Crossing quickly to her, Raymond seized her hair and pressed his knife to her throat.

What if she wasn’t the one? What if the legends were no more than fables, fancies spun of air and idleness? Well, at worst he could slit the girl’s throat and be gone as silently as he had come, he supposed, and find some other means by which to wrest the crown from Philip.

Then the girl lifted her head, staring up at him, and Raymond froze, licking his lips. His heart thudded heavily in his chest and a hot, painful yearning unfolded in his loins. 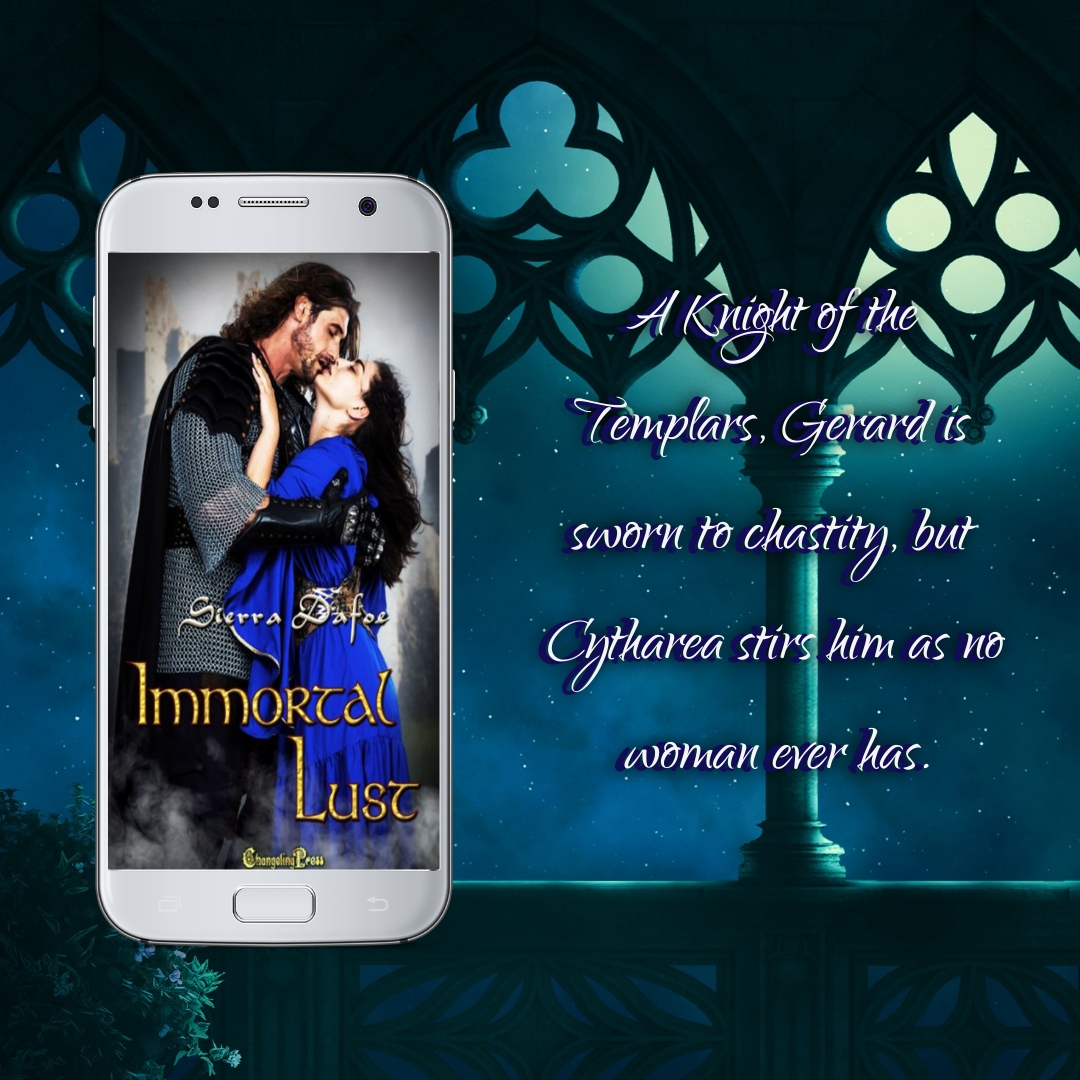 An award-winning author who received three CAPA nominations in her first year of publishing, Sierra Dafoe has gone on to receive numerous awards and recommended reads for her work. Check her website for free stories, a link to her readers’ group, sneak peeks, and all her latest news. Sign up for her newsletter to be entered in her monthly contest, and reach out through the “contact” page — she loves hearing from her readers!