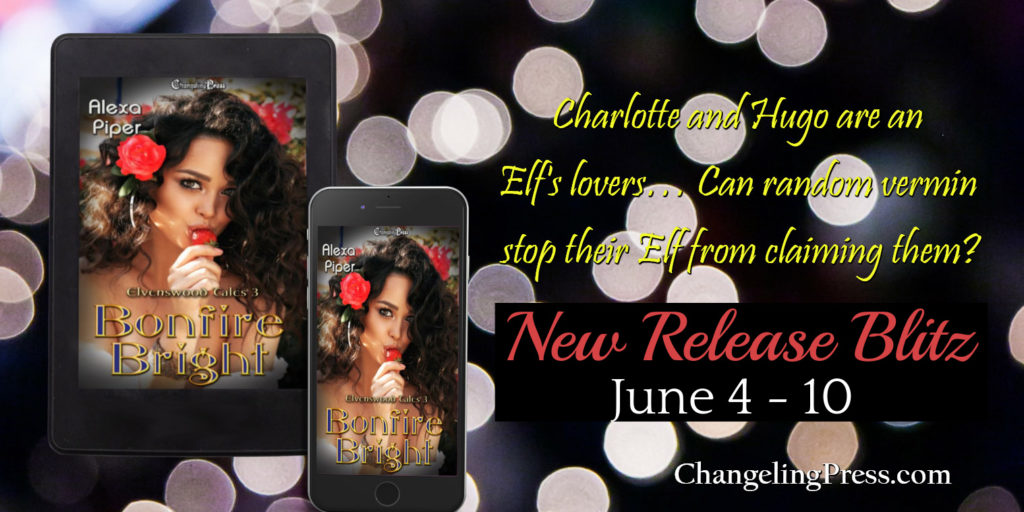 Charlotte “Charlie” Bisset, born to witches but without any magical power whatsoever, is slowly settling into her relationship with medical doctor and vampire Hugo and with Laurette, Elven royalty and passionate baker. While Charlie is reluctant to commit to moving in with her Elf, New Elvenswood is plagued by unnatural vermin attacks. Hugo is not a possessive vampire, or at least he tries not to be when it comes to his lovers. Yet, his human lover in particular regularly brings out Hugo’s wilder vampire side even if all he wants for her is sweet, fairy-tale love. Odd attacks on unsuspecting people in their city only leave Hugo more unsettled. Will the Elf Laurette finally get to claim both his lovers publicly as the thruple approaches the next step in their relationship? Will the vermin defeat our heroes in this urban fantasy romantic comedy? Approach the bonfire and find out… if you dare.

New Elvenswood General Hospital quieted during the night, but in Hugo’s experience, no hospital was ever really still. This morning, after another night spent in the OR, the handover during shift change felt calm to Hugo, though. While he filled in his ICU patient’s chart for the team of the next shift, he watched the nurses gossip and stuff their faces with chocolate Easter eggs someone had left at the nurses’ desk. How is it spring already? Hugo thought, double-checking his prescriptions. It was only just Midwinter. But of course, the Equinox had come and gone and announced the seasonal shift, and now it was almost Easter, which Hugo saw as the modern catch-all of the traditional spring festivals, and after, it would be Beltane soon. Generally, as a vampire, Hugo took only a passing interest in seasonal festivities. They marked the passing of time, but with time to spare ahead of him, the festivals were more or less like the hands of a clock, not extraordinary, just steady. However, this year, seeing the chocolate treats in their shiny foil wrappers and the wicker basket full of colored straw and colorful diabetes traps on the nurses’ counter, Hugo felt like an alarm was going off inside him. The sense of an old grandfather clock slowly ticking away time had vanished. His recently changed relationship status had everything to do with that. Satisfied with his chart after one last check, Hugo walked toward the nurses’ station. “Oh, good morning, Dr. Glover,” the day nurse said. Hugo had met her a few times, but he still needed to glance at her nametag. “Nurse Lopez,” he said, handing her the chart. “I’m leaving this one in your capable hands.” “Ah, a doctor’s handwriting I can actually read,” Lopez swooned, taking the chart and looking it over. Hugo had to agree with her that most younger doctors were not properly trained in cursive. “Don’t tell me her hands are more capable than mine,” Walters said. He was one of two ICU head nurses. So far as Hugo could tell this was because he managed to bring not just skill but also cheer to the job. “Never,” Hugo said with a wink. “And by the way, take me off the roster for the Easter weekend, would you?” “Huh?” Lopez said. “Don’t you always work the holiday shifts?” Technically true when I was single, Hugo thought. Charlie, born to witches but without inheriting the skill, was not likely to mind much whether he worked or not, but their other lover, Laurette, never passed up any opportunity to celebrate anything, and if Hugo wasn’t there, he’d never hear the end of Laurette’s complaints. Unless I can convince Charlie to help me convince Laurette to let this celebration go. It was unlikely for the Elf to forego any celebration, however. Hugo knew that all too well. Then again, while witches focused on the Equinox and on Beltane more, they usually adapted to the surrounding culture to some degree, and New Elvenswood, with its larger-than-average witch population, had Easter fires, complete with the burning of effigies as proxy sacrifices, as well as an Easter egg hunt that was fun for the children and meant to bring prosperity to the grownups who participated. If she insists, I might be the first vampire in the history of the city to go on an egg hunt with a witch descendant, even if she isn’t a witch. Hugo wasn’t sure whether he wanted to roll his eyes at the idea. He wasn’t sure whether he liked it, running through the woods with Charlie in search of painted eggs, but something about it did seem appealing. Laurette probably wouldn’t want to come. He lacks the outdoorsy spirit. Yet, Laurette was willing to do many a thing he didn’t enjoy if it meant pleasing their human lover. The Elf had even — on more than one occasion — interrupted his baking for Charlie. And, while Laurette could be pushy beyond reason, he had so far not pestered Charlie one tiny bit about her failure to come to a decision about moving in with him. Laurette had asked her to do so this past Valentine’s Day among a rain of trickster arrows and a short trip to hell. “He has a girlfriend now, didn’t you hear?” Walters said, pulling Hugo out of his thoughts. Lopez looked Hugo up and down. “Shame,” she said. “You know, I’m into women, but if I’d ever make an exception, they’d better look like you — tall, raven-haired, mysterious, and with those pretty blue, to-die-for eyes.” Hugo cleared his throat. “Well, thank you for that… compliment?” he said. She nodded. “Yes. Definitely a compliment. So what? Are you settling down? Moving in together?” She wiggled her eyebrows. “Making more adorable –” “No,” Hugo said. Heavens, if this is what I have to put up with, I feel for every woman who doesn’t want to pump out eggs like the Easter bunny. “But we are spending the weekend together.” He hoped so. He needed to let Charlie know and find out what her plans were. And then, he’d have to navigate whatever extravaganza their Elf had planned. Elven extravaganza… Hugo sighed, long and deep, and the nurses exchanged a look. “Sounds like she’s a right handful,” Lopez said. She patted his arm. “I’ve been there, and yes, they are usually the hottest ones.”

Alexa Piper writes steamy romance that ranges from light to dark, from straight to queer. She’s also a coffee addict. Alexa loves writing stories that make her readers laugh and fall in love with the characters in them. Connect with Alexa on Facebook or Instagram, follow her on Twitter, and subscribe to her newsletter!