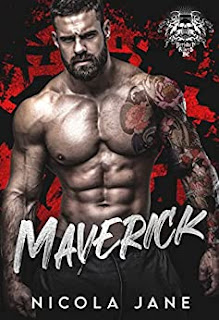 Life has a funny way of pulling you in when you least expect it. It’s been a few years since I was back at The Perished Riders MC clubhouse, and fuck, it’s damn near the same. I don’t know what I thought would happen in my time away. I left because my dad was stuck in the past, unable to move the club forward into the present day, so it shouldn’t be surprising that the hell hole hasn’t changed since I was a kid.

It’s also no surprise that now the miserable bastard is dead, there’s not much left to salvage.

But I’ve stepped up, just like my brothers wanted me to, and I’m making changes. I’m gonna run this place straight, the way it should have been ran all those years ago.

But the dead have a funny way of leaving a legacy, and it ain’t always good. Eagle’s presence lingers like a fucking bad smell, and everywhere I turn, there’s another mess he left behind.

The road is calling me, and I’m beginning to think the club ain’t worth it, but then life throws me a curveball in the form of Rylee Carter.

It’s by chance that my new neighbour hears my cries calling to her from the pits of my own hell. Instead of ignoring me, she sends me a lifeline. One I grasp with both hands.

Being rescued by The Perished Riders MC was just the beginning of my journey.

Since Maverick came into my life, things aren’t so mundane. He shows me just how strong I can be, and with him by my side, suddenly, everything seems possible.

Next Up is A W Turner