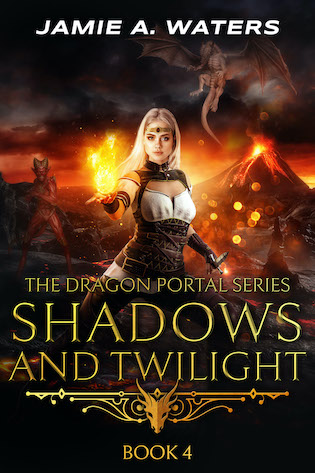 Sabine owes her life to the two demon brothers who helped keep her hidden from the Fae for the past ten years.

When she learns Dax has been forced back to the underworld to stand trial for his treasonous crimes, Sabine races to their volcanic home to save him. What she discovers is a long-hidden truth that has the potential to shape the future of their world or destroy it.

Only an ancient weapon of power can shatter the portal bindings…

The demons secretly recognize Sabine as the true queen of the Unseelie, and they’re determined to keep her for their own purposes. With her magic, they can escape the underworld and declare vengeance on those who oppose them.

But first, they must destroy all her ties to the light, including the man she loves.

Another scream drew Malek’s attention back to the tunnel. His hand tightened around the hilt of his sword.

“We’ve got company. There’s not enough space here for me to shift without bringing down the tunnel.”

“Then prepare to fight,” Bane said, his silvered eyes turning to stare at the dark tunnel. “The hellhounds are

part of the Hall’s defense. They’re driving those creatures to us. They won’t stop until every living thing in their path is dead, including us.”

Dozens of large arachnoid creatures scuttled forward. They were nearly the size of wolves. Their exoskeletons were a deep black color, while yellow ooze dripped from their fangs.

“Spiders?” Blossom shrieked. “Spiders shouldn’t be that big! What kind of garden do those suckers live in?”

Malek sliced through the first one, leaping back as one of its sawtooth legs tried to swipe at him. He spun toward the next, narrowly missing a spat of the yellow ooze it had shot at him. Using his magic to fuel his strength and speed, he took the head of the creature.

“Watch their venom,” Bane warned, swiping his claws down one of the arachnoids ’necks.

Sabine threw shimmering orbs of condensed power. Each one burst apart, expanding like a magical explosion to cut down dozens of creatures at once. It was effective, but Malek wasn’t sure how long she could keep up the attack.

“Die, evil fiends!” Blossom shrieked and darted in between their legs, tripping the creatures as they tried to catch the pixie. One after another, they toppled over and then scrambled back to their feet.

Rika shouted a battle cry and lifted her short sword, hacking at the legs on the creatures Blossom targeted. Malek grinned at their teamwork and turned his attention toward the nearest attacker. He quickly cut it down before facing the next, each one brandishing its sharpened legs.

A creature struck out at Malek, but Sabine shot her hand out and speared the creature with another burst of magic. His gaze met hers, and in that moment, the connection between them flared to life. Love and undeniable need surged within him, mirroring the emotions in her eyes.

Sabine gave him a teasing smile. “Try not to die, will you? I have plans with you later.” “I wouldn’t dream of disappointing you,” Malek said with a grin.

Jamie A. Waters is an award-winning fantasy romance author and dragon enthusiast. Weaving together magic, intrigue, and some delicious romance, she creates memorable and immersive worlds that provide the perfect escape. Her books feature strong, capable heroines and their swoon-worthy heroes who will stop at nothing to save the day.

Jamie currently resides in Florida with two neurotic dogs who enjoy stealing socks. When she’s not pursuing her passion of writing, she’s usually trying to learn new and interesting random things (like how to pick locks or use the self-cleaning feature of the oven without setting off the fire alarm). In her downtime, she enjoys reading, playing computer games, painting, or acting as a referee between the dragons and fairies currently at war inside her closet.